Home » Archive » Shared News » After Giving Second Chances To So Many, A Retirement Well Earned

After Giving Second Chances To So Many, A Retirement Well Earned 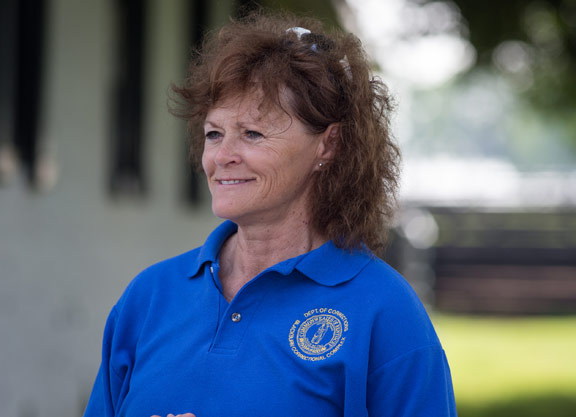 Not too many people walk out of prison saying they're looking forward to returning in the near future. But that's exactly what Linda Dyer intends to do.

The higher-ups at the Blackburn Correctional Complex in Lexington will be glad to have Dyer back when she does choose to return–and so will the nation's Thoroughbred aftercare community.

Although May 30 marks Dyer's official retirement date after 14 years as farm manager for the Thoroughbred Retirement Foundation (TRF)'s Second Chances Program at Kentucky's largest minimum-security state prison, Dyer told TDN she plans to stay very much involved with the horses and inmates, helping to raise both awareness and funds for the nationally accredited vocational training program in equine care and stable management.

“I love working with horses. I love to teach people what the old-timers–the old, hard-boot Thoroughbred men–taught me,” Dyer said. “So I've tried to share that with these guys so they'll be better horsemen when they get out of here and can get a job.”

In 1999, the TRF opened the Blackburn program in a converted prison dairy barn. Today, it is one of the largest of the organization's seven Second Chances correctional facility farms, with 58 former racehorses living out their retirement years on 100 acres of lush Kentucky bluegrass. Inmates selected for the program learn marketable job skills while reaping the emotional benefits of working closely with Thoroughbreds.

Dyer grew up in Lexington and described herself as a “horse crazy” girl. “I was born that way,” she said. “I was an A Circuit show groom. My father died when I was 15, so I have worked pretty much since. I broke yearlings, galloped, prepped, brought back lay-ups, handled stallions, foaled over a thousand mares, bred mares, and managed Thoroughbred farms my whole life.”

But even as Dyer kept racking up equine experience while raising a family, she grew concerned about post-retirement finances. She worked for awhile with the Kentucky State Police, but the evening shifts didn't suit her crack-of-dawn horse person's body clock. When she heard in 2005 that the Blackburn farm manager's job was open and that it provided retirement benefits, she applied and landed what turned out to be a dream job for someone with her knowledge and demeanor.

“I really get a big, huge grin of satisfaction when these people learn to be able to take better care of horses,” Dyer said. “And even if they don't leave the program and get a job working directly with horses, they learn responsibility.”

Dyer said she'll miss interactions like the one she witnessed one recent morning after bringing an inmate down to the stable for his shift.

“I was in my office with the door open, but he couldn't see me,” Dyer recalled. “He went right down the line, hugged every horse around the neck and said 'Good morning!' The prisoners tell me the horses calm them. They can talk to the horses, tell them anything they want to, and it's good therapy for both the horses and the inmates. They take pride in taking care of the horses, so it's a win-win situation for the horses and the people.”

When asked if she had any post-prison success stories she can relate, Dyer pointed out that rules prohibit her from having any contact with inmates after they're released. But some of the former inmates do write in to the TRF to express their gratitude, and Dyer reads those notes with pride even though she can't respond to them.

“A guy walking on the yard one day not too long ago stopped me and asked if I remembered this one inmate who left about four years ago,” Dyer said. “He said he's been working on the racetrack ever since he got out, and he loves it. And I did remember him–he had never touched a horse before he came here and was initially pretty scared of them. But he turned into a good horseman, and it's great because it gave him a career.”

Ask Dyer to name a particular horse that resonates with her after 14 years on the job, and she does not hesitate to praise the remarkable recovery of Z Camelot (Smart Strike).

In June 2016, Z Camelot was descried as the worst-off of 43 emaciated horses removed from an abandoned Mercer County farm leased by Chuck Borell (who was later arrested and entered a guilty plea without making an admission of guilt to nine misdemeanor counts of animal cruelty) in partnership with his daughter, the former Thoroughbred trainer Maria Borell (who is still at large with an open arrest warrant for 43 misdemeanor counts of cruelty).

Z Camelot was found locked in a stall, 400 pounds underweight, with sores and significant hair loss, subsisting on remnants of soiled shavings. By the time he was placed at Blackburn, it was iffy that the gelding would survive.

Under Dyer's leadership, the inmates nursed Z Camelot and five other neglected horses back to health, and a year later “Z” was adopted out to a new home and is currently thriving in a second career as a sport horse (read a 2017 profile about his recovery here).

“The inmates were so upset over the condition of that horse,” Dyer said. “They said they'd like to put [Maria Borell] in the hole and feed her bread and water for a couple of months. Me, I told them I wouldn't feed her anything, because she didn't feed those horses–the inmates were being nicer than me. But it was a good learning experience for them, because they learned to bring horses back to health that had been severely starved.”

Dyer was asked to name the one thing people don't fully understand about her job.

“It's not always easy,” Dyer replied. “You have a lot to take care of between the prison part of it and a farm. But to know that you hopefully have changed somebody's life, that's very rewarding. I preach to these guys a lot to make them realize what they're doing with their lives, that they don't get to come around and do it again, because you only get one life. And hopefully the horses have helped to change their lives, and that they will go out and live their lives in a better way.”

The TRF will honor Dyer's service by naming a new fund after her. Kim Weir, the TRF's director of major gifts and planned giving, said proceeds from the Dyer Blackburn Fund will be specifically dedicated to the care of the horses at Blackburn, and the fund-raising goal is to meet the $83,000 annual budget for that purpose. To donate, click here.

“Linda has been out there on her own managing all those horses, and she's clearly a gifted teacher turning out men who want to do it when they leave,” Weir said. “There's an inspirational and aspirational part that she instills in them. Linda is legendarily her own woman–she has her own style, and it has worked so beautifully for a long run at Blackburn. Working in a prison system can be like working with your hands tied behind your back. But Linda has just thrived on the challenge of making this program work. We cannot be any more proud of her. She has clearly found that she can change lives, and she's been doing it for 14 years.”

Dyer said she plans to get a part-time job in retirement that will allow her to spend more time enjoying her six grandchildren. She'll also spend as much time as she can on horseback.

“I have a half Thoroughbred, half Quarter Horse that I bred. I like to trail ride a lot,” Dyer said. “And I actually have a horse here at Blackburn. If I can ever get some more fence built on my place, I might come back and get him and take him home with me.”