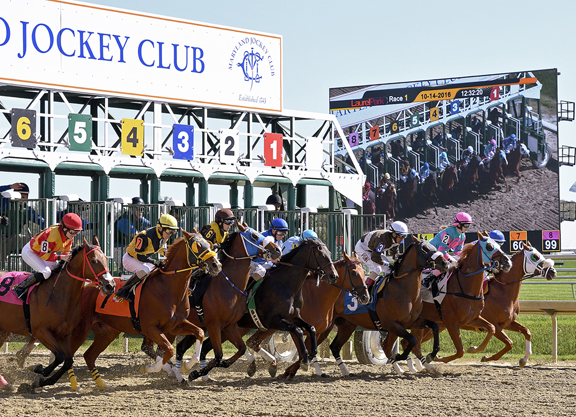 The work-in-progress new dirt racing surface at Laurel Park has made it through 10 racing dates and nearly a month of training without a catastrophic injury after being closed for 11 days in late autumn after eight equine fatalities. But a Monday snowstorm followed by a sharp drop in overnight temperature provided the first 2022 challenge to a track that has historically been prone to problems during winter weather.

Training was cancelled at Laurel Monday and Tuesday but will reopen Wednesday at 6:30 a.m. without timed workouts being permitted as a safety precaution. A chance of freezing rain is in the Wednesday forecast ahead of the next scheduled race date on Thursday, Jan. 6.

Mike Rogers, the president of the racing division for The Stronach Group (TSG), which owns Laurel, gave an update on the track to the Maryland Racing Commission (MRC) during Tuesday's monthly meeting.

After Rogers accentuated the positive aspects of the project, commissioner R. Thomas Bowman, a veterinarian who chairs the MRC's Equine Health, Safety and Welfare Advisory Committee, reported that despite the progress, he has concerns that the expert consultant hired to represent the horsemen is not having his input fully acted upon by TSG, which is relying more heavily on the expertise of its own consultants.

Bowman said that he is “absolutely confident that everybody is trying to do the right thing” to keep the track safe. But, he added, “I am fairly disappointed, however, in the apparent disagreement on which of the experts that has been brought in is actually the pilot of the ship.”

When speaking remotely via teleconference, Rogers had introduced both Chris Bosley, the MJC's track superintendent, and Glen Kozak, who served in that same capacity in the mid-2000s before being hired by the New York Racing Association, in case the commissioners wanted to ask questions. Bosley handles the day-to-day operations while Kozak was been asked to consult.

Not introduced was John Passero, who years ago was Laurel's superintendent but has recently been retained by the Maryland Thoroughbred Horsemen's Association as its consultant. It was not clear if Passero was on the call in listen-only mode; in December he had been previously introduced alongside the other experts to speak at MJC meetings.

According to Bowman, Passero “has the confidence of the horsemen–at least the rank and file horsemen–and there seems to be a disconnect in what John proposes to do and what some of the other experts propose to do. And John Passero has been very, very quick to point out that he is not trying to be critical of anyone else's opinion. But he does feel frustrated when his input is not being heeded.”

Bowman continued: “Everybody has tried to be cooperative. Everybody has offered me what I think is an honest opinion. But when it gets down to it, somebody's got to call balls and strikes, and it would seem that the person most able to do that would be someone that is on the grounds on a regular basis.”

After Bowman aired his concerns, Rogers addressed what he said he believes to be the discrepancy among the consultants.

“All experts are on the same page. The only disagreement is timing on one of the issues,” Rogers said.

That issue has to do with a “pad” of compressed cushion that sits on top of the limestone base. It was established weeks ago as a protective measure while the body of the cushion gradually gets rebuilt through the addition of coarse sand. Laurel's crews have already added 2,000 tons of sand, with another 1,000 tons to be slowly mixed in.

“At some point, we all know that pad will not be able to be maintained,” Rogers said. “And the crew is going to have to dig into that pad, and we do not want to do that until we feel the cushion has the body in it to do that.”

Recent history bears out Algeo's point of view. The autumn cluster of fatalities was only the latest safety blow at Laurel. After years of freeze/thaw and drainage troubles that TSG attempted to fix via piecemeal repairs, the main track was in such bad shape last spring that Laurel ceased racing on Apr. 11, 2021, to begin an emergency overhaul, which morphed into a multi-million-dollar rebuild from the base up. What was initially supposed to have been a closure of about one month ended up taking five months before racing could resume.

“The racing commission is charged with making certain that we have a safe track. At the same time, our commission cannot be the 'track police,'” Algeo said. “This is a period of time which most concerns me, because this is the type of weather–the change of weather, the deep freeze, the snow–is where the track surface issues seem to happen in a 24-48 hour period.”

Bosley expressed confidence that the Laurel surface made it through Monday's test of four inches of precipitation followed by a dramatic temperature drop to 17 degrees Fahrenheit.

After crews worked all night, Bosley said it was “very impressive” how the track reacted to the winter weather.

“That's a really good sign,” Bosley said. “An early inspection of the pad [Tuesday] morning [revealed] that we still have a pad … That means that the plan we submitted is working. It means that the sand that we have added into the track is working. That doesn't mean that we need to stop adding this coarser sand into the track. We definitely need to add more. But we're definitely heading in the right direction.”