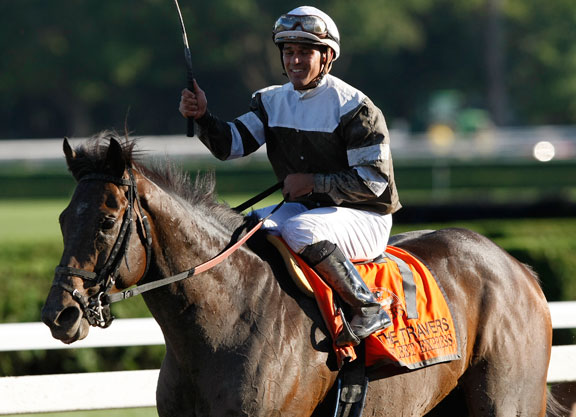 Afleet Express (Afleet Alex–Expanse, by Distant View), upset winner of the 2010 GI Travers S., will continue his stud career in South Korea, according to information from the Korean Racing Authority website.

A $245,000 graduate of the 2008 Keeneland January Sale, Afleet Express was trained by Jimmy Jerkens for Gainesway and Martin Cherry and won four of his seven trips to the post, including a victory in the GIII Pegasus S. two starts prior to his nose success in the Midsummer Derby.

From 63 foals of racing age, Afleet Express has sired a total of 31 winners while standing at Gainesway, among them GIII Winning Colors S. victress Diva Express and the SW Co Ferment. Bold Kings (ex Bold Arrival, by Gilded Time) was a $14,000 purchase by the KRA out of the 2013 Fasig-Tipton October yearling sale and ran the table in seven starts at three, including a defeat of his elders in the ₩700 million (about US$590,000) Grand Prix (2300m). To date, Bold Kings has earned just over ₩690 million.

A half-brother to GISW Embellish the Lace (Super Saver) and to MSW & MGSP Reporting For Duty (Deputy Commander), Afleet Express is out of a half-sister to MGSW Eye of the Tiger (American Chance) and SW & MGSP Wildwood Flower (Langfuhr), the dam of the late GISW Materiality (Afleet Alex) and GSW & MGISP My Miss Sophia (Unbridled’s Song).