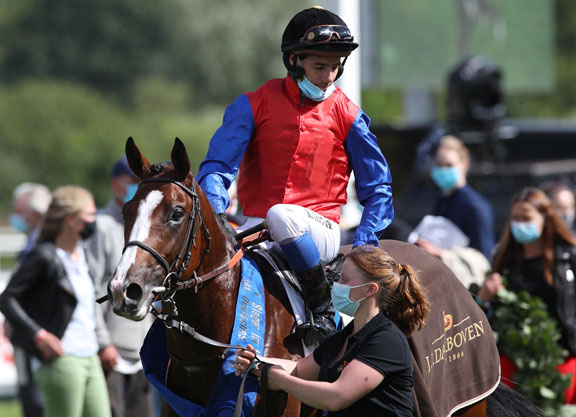 Stall Wasserfreunde's domestic star Wonderful Moon (Ger) (Sea The Moon {Ger}) was eclipsed, but Gestut Schlenderhan's homebred In Swoop (Ger) (Adlerflug {Ger}) stepped into the spotlight with a battling success in Sunday's G1 Idee 151st Deutsches Derby at Hamburg, with the Francis-Henri Graffard trainee becoming France's first winner of Germany's Blue Riband. Employing patient tactics in rear off the tempo set by habitual frontrunner Kellahen (Ger) (Wiesenpfad {Fr}) for the most part, the 137-10 chance was under stern urging turning for home and kept on relentlessly for continued rousting in the straight to hit the front with just 50 yards remaining en route to a 3/4-of-a-length verdict from Torquator Tasso (Ger) (Adlerflug {Ger}). Grocer Jack (Ger) (Oasis Dream {GB}), who was threatened on all sides once setting sail for home inside the final quarter mile, kept on to finish the same margin back in third. The Henk Grewe-trained 2-1 favourite Wonderful Moon came from off the pace to threaten out wide in the straight, but faded late to finish just over three lengths off the winner in sixth.

In Swoop, who went untested as a juvenile, followed up a May 15 debut success tackling 11 furlongs at Lyon-Parilly with a third back over that strip in the June 6 G2 Prix Greffulhe in his only other start last time and franked Gestut Schlenderhan's policy of spreading its talent further afield after an extensive overhaul of operations. Having emerged from tumultuous times and fresh from its own 150th anniversary in tandem with this contest itself last year, the stud extended its imposing record haul to 19 and, with Graffard at the helm of this project, a landmark win for France.

“He was a horse with little experience going into the race, but had improved quite a lot from the Greffulhe,” explained the Chantilly-based conditioner. “Ronan [Thomas] gave him a beautiful ride and it went exactly as we had planned, which was to avoid all the scrimmaging in the race. I knew he would quicken well from the top of the straight and I'm sure he will improve more. There is nothing for him now until September and the G1 Grand Prix de Paris, so we will bring him back for that.” The winning rider, celebrating a career high of his own, added, “We knew there'd be some pace beforehand so we decided it would be best to give him a chance to find his own rhythm. As expected, it was fast and that's what he did. I started to get an idea where to go on the final bend and down the middle was the best way home. He can be a little bit lazy at times, but he's a big baby who only started his season two months' ago. He's still learning, he hasn't finished improving and I think he will get better race by race.”