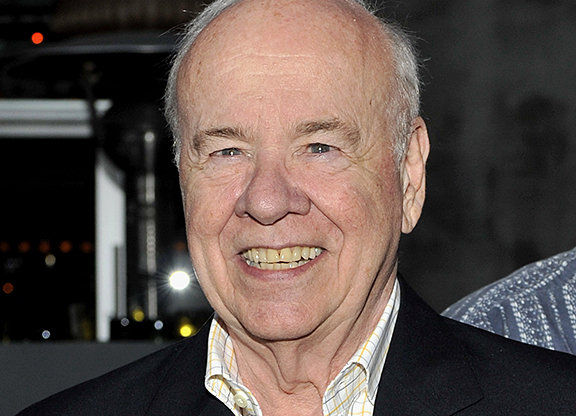 Tim Conway, the actor, comedian and racehorse owner, has died at the age of 85, according to CNN. Wikipedia listed the cause of death as normal-pressure hydrocephalus, a condition in which excess cerebrospinal fluid builds up in the brain. The family has asked that instead of gifts, donations be made to The Lou Ruvo Brain Center at the Cleveland Clinic in Las Vegas, Nevada, CNN reports.

Conway was one of the stars of the Carol Burnett show, and won four Emmy Awards for his work on the program, one for writing and three for acting.

A longtime fan of thoroughbred racing, Conway was a regular at the track, and owned horses as well. Along with Chris and Judy McCarron, he was the co-founder of the Don MacBeth Memorial Jockey Fund, named for the rider who died of cancer at the age of 37, and which provided funds for injured riders. He served as vice president of the board of directors of the Fund.

Conway was born in Willoughby, Ohio and grew up in nearby Chagrin Falls.

He wrote and starred in the 1986 comedy The Longshot about four friends who enjoy betting on horse racing and who get involved in a scheme to cash a big bet.

His most famous racing skit was playing his long-running character Lyle Dorf as a jockey on the Tonight Show with Johnny Carson.

“He was a man of pure class,” said former jockey Chris McCarron, who knew Conway for close to 40 years. “He absolutely loved the racing game and I think he loved jockeys even more. He had the utmost respect for riders and both he and his wife Charlene were huge jockey fans and that's the biggest reason why Tim and Judy decided to start the Don MacBeth Fund back in 1987. He used to joke that when he was on tour, he would make sure his tour manager scheduled him in cities that had a racetrack. And that's the truth. Whenever he went to a city where there was a racetrack, he would go to the races. He was a horse owner for a short period of time, and he couldn't help but be comical there because the colors he had made had two words on the back: No Passing. He used to joke that the colors didn't work very well, because his horses were always in last, so no one could read the back.

“He was a kind and generous and sweet man. He really was. What you saw on television was his complete personality. He always wanted to make people laugh. Even if you were just sitting around having a simple dinner or lunch, he'd always come up with something that made you laugh so hard. He put smiles on millions of faces over the years, and he will be sorely missed.”