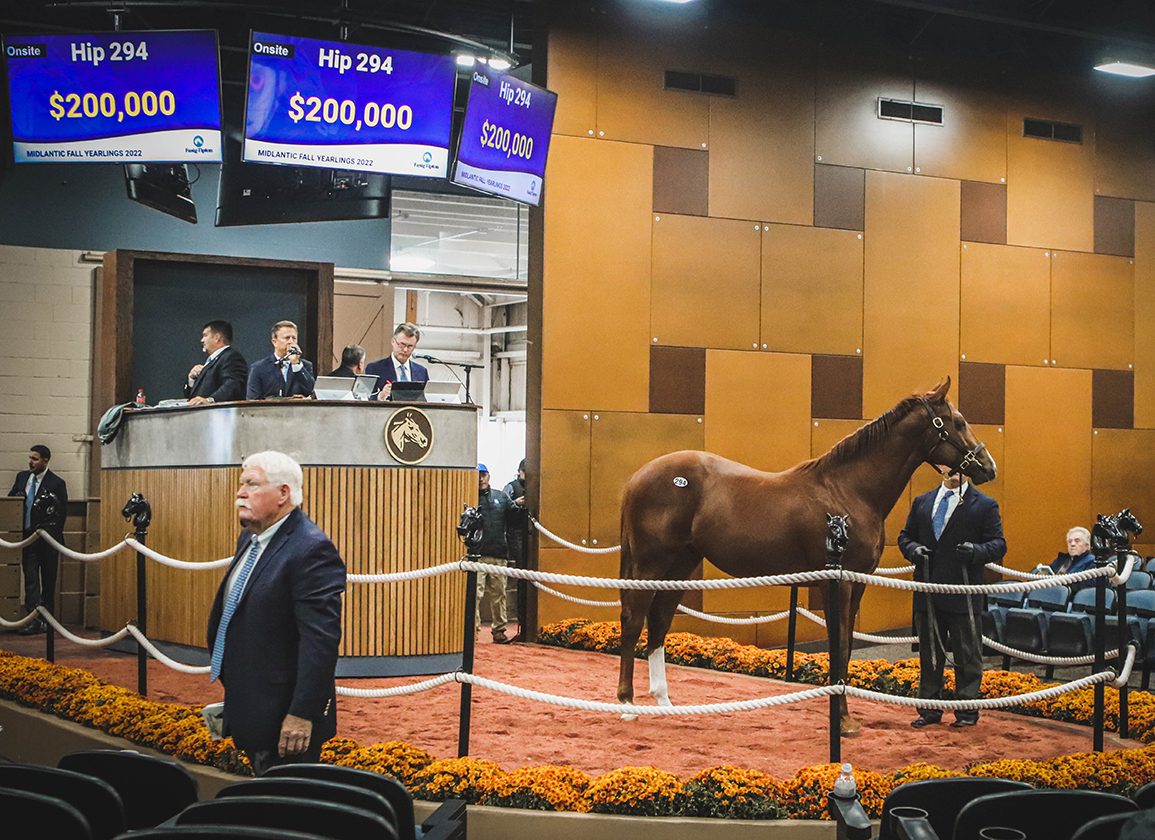 TIMONIUM, MD – A steady edition of the Fasig-Tipton Midlantic Fall Yearlings Sale–which featured heavy rain from its weekend previews through both sessions–concluded Tuesday in Timonium with numbers down from last year's lively renewal of the auction.

“The weather was pretty dismal, but it was a pretty active sale,” said Fasig-Tipton Midlantic Sales Director Paget Bennett. “The pavilion was very busy both days. We had a great crowd both days. Today, I saw people I didn't see yesterday. People kept coming and they came to buy horses.”

“Last year was so good,” Bennett said of the comparison between the two sales. “I think this year was still very solid. Overall, we finished up well. There were people here to the end. When we hit the supplement, there were sparks that flew in there as well.”

The auction's top price came during Monday's first session when Legion Bloodstock purchased a filly by Uncle Mo for $320,000. The Legion team was back in action Tuesday, purchasing a filly by More Than Ready for $200,000. That price was matched a few hips later in the session when Summer Street went to $200,000 to acquire a colt by Munnings.

In all, 23 yearlings sold for six figures this year. There were 16 who hit that mark last year.

“I thought it was pretty strong,” Davis said. “When I was watching the figures yesterday, I was very happy to see a lot more horses selling in that $20,000 to $50,000 range that we've kind of been missing here for a while. There is some uncertainty in the Maryland region with racing in general, I think that may have affected us a little bit. I think a lot of the money here is from outside. But that's good. We had a really strong catalogue. Fasig-Tipton did a great job and had a lot of really strong horses here and brought him some stronger buyers.”

Clovis Crane was active throughout the two-day auction, purchasing yearlings with an eye towards resale next spring. The horseman noticed a persistent polarization in the marketplace.

“The market is very stallion heavy,” he said. “If you have the right stallion, they will pay you a lot for them. There a few of the really hot stallions–the Bolt d' Oros, the Not This Times–if they want them, they will pay quite a bit more for them. But then you have the other stallions that, if they're not on them, they are not on them at all. It's more of the same, but I think it's even more polarized then ever. There are so many that are going to work here on a racing level, it's intriguing that they are not better received.”

Crane admitted he needed to buy at the right end of the polarization in order to be successful next year.

“We are looking for individuals that we can resell, so when you are reselling, it's sire power that you have to have because if that's what they want, that's what you have to give them,” he said. “It's very tough to buy the desirable horses. It's more of the same. There are a lot of useful horses that can be bought properly. If you are not looking to resell, there are lots of horses that are viable to go to the races with and would be nice racehorses.”

After purchasing the top-priced offering during Monday's first session of the sale, Kristian Villante of Legion Bloodstock was back in action in Timonium Tuesday, going to $200,000 to acquire a filly by More Than Ready (hip 287). Like Monday's sale-topping daughter of Uncle Mo, hip 287 was consigned by Scott Mallory on behalf of Matt Dorman's Determined Stud.

“She was very similar to the one yesterday,” Villante said. “She's from a great family and raised at a great place. She just stood out on physical and pedigree. She was just a very classy filly and straightforward, just like yesterday. So we got lucky again.”

Both yearling fillies were purchased for the same partners.

Asked for the partners' game plan, Villante said, “We are just kind of taking each sale individually. They do breed, so they like fillies with some pedigree and they've had some luck with some turf horses recently, so her pedigree appealed to them.”

The Maryland-bred filly is out of Fluffhead (Animal Kingdom), a half-sister to GI Breeders' Cup F/M Turf winner Shared Account (Pleasantly Perfect). Dorman purchased the mare, with the filly in utero, for $165,000 at the 2021 Keeneland January sale.

Dorman gave credit for picking the mare out to trainer Phil Schoenthal, who admitted he was a big fan of the yearling.

“Matt is a commerical seller. It's a business. And she was coming to sell, but I loved that filly and I begged him to keep her,” Schoenthal said. “I tried to buy her myself and had to stop for risk of my wife throwing me out of the house. If I was ever going to swing for one, she'd be the one. But it's a business and we are trying to make money at this. It's better to sell and regret than to not sell and regret. She was a lovely filly and I am thrilled that those guys got her–end-users, friends of mine. Everybody is happy, but me.”

The 7-year-old Fluffhead was bred back to Gift Box this year.

“She was a big, pretty mare and she had that family behind her,” Schoenthal said of the mare's appeal at the 2021 auction. “We were the underbidders on Shared Account at that Night of the Stars sale, we were big fans of hers and that whole family.”

Yearlings from the consignment of Becky Davis occupied two of the top three spots on the results sheets for Tuesday's session of the Fasig-Tipton Midlantic sale, led by a colt by Munnings (hip 294) who sold for $200,000 to Summer Street. The yearling is out of Frost Fire (Medaglia d'Oro) and Davis consigned him on behalf of his breeder, Jon Marshall. Davis admitted Marshall had mixed emotions about Tuesday's result.

“The owner had three horses that he sent to us and after they arrived he asked me my opinion of them,” Davis said. “I said I liked the Munnings the best and he was surprised because wherever he was before, they had told him that he was a little crooked and he wasn't really developed. But I said I didn't think it would bother him.”

Davis continued, “I think our expectations were probably $75,000 to $100,000, so we are very pleased. The owner was bordering between being excited and being disappointed because he got so excited about him. He had his heart scanned and I had been telling him how he was developing and sending him pictures. He was so thrilled with him, by the time it was time to go through the ring, he was ready to race him himself.”

Marshall, who topped the 2020 Midlantic sale when selling a son of Gun Runner for $270,000, also sold a filly by Speightstown (hip 271) for $125,000 to David and Lori Hughes's Mens Grille Racing through Davis's consignment Tuesday.

On behalf of breeders Bowman and Higgins Stable, Davis sold a colt by Arrogate (hip 346) for $180,000 to Chuck Zacney's Cash is King and LC Racing. The yearling is out of How My Heart Works (Not For Love), a half-sister to the dam of GI Haskell S. winner Cyberknife (Gun Runner). He is a half-brother to stakes winner and graded placed Monday Morning QB (Imagining), who was purchased by Zacney for $25,000 at the 2018 Midlantic sale.

“To be honest, my expectations were a good bit more for him with the improvement in his pedigree with Cyberknife and Arrogate and he is a good-looking horse,” Davis said. “I thought we were going to get a stronger price for him. He did have a little bit of an issue with his X-rays and when I found out the reaction to him on the sales grounds and the environment was kind of chilling off with him, I knew we were probably in trouble from what I thought he was going to bring. So I did put a modest reserve on him.”

The decision to sell the colt was made easier after the same breeders took home a Bernardini filly (hip 266) for $170,000 earlier in the session.

“The same owners had the Bernardini filly that I ran through that I did not sell,” Davis explained. “So they decided to keep her and race her and make her a broodmare, which was kind of always the point with her when she was bred, but they decided to run everything through the sale. When we knew things were cooling off with him, we decided to put a strong reserve on her and when we brought her home, they decided to let him go. As it turned out, Chuck Zacney bought him, so he's going to go to the same person that bought Monday Morning QB from me. It's all worked out perfectly.”