Action Returns to OBS Ahead of Spring Sale 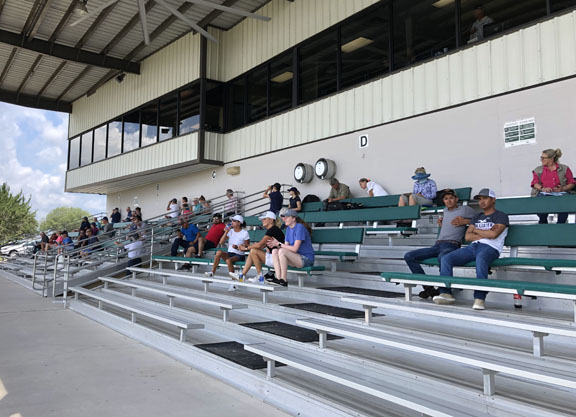 The juvenile sales season, on pause since March due to the global pandemic, began its return to action with the first of seven under-tack sessions for the Ocala Breeders' Sales Company's delayed Spring Sale of 2-Year-Olds in Training in Central Florida Sunday.

A New York-bred filly by Into Mischief (hip 1240) recorded the day's fastest furlong breeze when covering the distance in :9 4/5. Consigned by Hartley/DeRenzo Thoroughbreds and part of the sale's supplemental catalogue, the filly is out of Miss Vigilance (War Pass), a half-sister to Grade I winner Man from Wicklow (Turkoman) and multiple graded stakes winner Wild Heart Dancing (Farma Way). The juvenile was purchased by Hartley/DeRenzo for $200,000 at last year's Fasig-Tipton Saratoga sale. She had originally been targeted for the canceled Fasig-Tipton Gulfstream Sale.

“I knew she was going to be good if I could ever get her somewhere,” Randy Hartley said. “I loved her all year at the farm. She has been my favorite horse. I knew when we first started breaking her that she was just going to be good. I've been telling everybody about this filly. I've brought a bunch of people to the farm to see her just because I thought she was so special.”

OBS hosted the first juvenile sale of the year in March, but subsequent auctions have been canceled or rescheduled. The reshuffling of the calendar forced a wait and see, but be ready to strike training schedule, according to Hartley.

“We were trying to keep these horses trained without overtraining or under training them because we didn't know when we were going to go,” he said. “So it was kind of tricky. After they cancelled Miami, I backed off of everybody. We were still turning them out just like when we were breaking them. We did a lot of jogging and hacking in the field and tried to keep them happy and fit at the same time.

He continued, “The timing has been bad for everybody, as far as waiting and having them a longer period of time, but honestly, it's probably really good for the horses in the long run, this little bit of time. I've seen mine mature so much over the last two months. Some of the sales are kind of early.”

With all the uncertainty, not just in the racing industry, but across the globe, expectations for next week's Spring sale are guarded.

“It's going to be scary,” Hartley admitted. “Coming over here, we're thinking we'll have a good year if we just get our money back. But all of the regular people are here-Donato [Lanni] is here, [David] Ingordo is here, Patti Miller is here. I think pretty much all of the agents are here. Now it's just going to be if we get people to come for the sale. There are some awful good horses here that should draw people. In a normal time, this would be the best book OBS has ever had. They have a lot of quality horses here. But it's like you're in trouble with your parents and you have to go home and face it. You don't know how bad it's going to be. It could be not that bad, but it could be bad.”

A pair of colts shared Sunday's fastest quarter-mile time of :20 4/5.

Hip 149, a son of Blame, hit the :20 4/5 mark for Wavertree Stables. Out of Mommo (Speightstown), the 2-year-old was purchased by the Red Wings pinhooking partnership for $77,000 at last year's Fasig-Tipton July sale.

“He is out of a Speightstown mare and he's very Speightstown looking,” said Wavertree's Ciaran Dunne. “He looks like a fast horse, he has a bit of length to him and a bit of size.”

Dunne said the two-month delay was likely beneficial to his colt.

“He's matured a lot mentally,” Dunne said. “He was very babyish. I think that's been the biggest help for him, mentally he has kind of grown up. Physically he's always been a pretty easy horse to be around, but he could be a little scatterbrained and the extra time has allowed him to mature that way.”

Wavertree has catalogued some 80 head to the Spring Sale and the extra time may end up being a positive for the overall consignment, Dunne agreed.

“I think we have probably come into this sale sounder than normal for this number of horses,” Dunne said. “There are fewer shins, which I think is a maturity thing, and fewer niggles and this and that. I think they are probably ready to do more than we are asking them to do. Which is always a help in terms of keeping them together. We just sort of tipped along and treated them like they were going to the races. We put the last work into them once we got to OBS and other than that, we just trained them like they were going to go to the races and run three-quarters.”

Asked if it felt good to start selling again, Dunne admitted, “I never thought I'd be excited to go to a sale, but we were very excited to get in here and get this going and see how it works.”

Dunne said he expects to see familiar trends when bidding begins again next Tuesday in Ocala.

De Meric Sales sent out hip 1236, a colt by Quality Road, to share the :20 4/5 bullet time. The bay, a $400,000 purchase at last year's Keeneland September sale, is out of Loveofalifetime (Medaglia d'Oro) and is a half to stakes placed Into Mystic (Into Mischief). Loveofalifetime is a half to Grade I placed Rogue Romance (Smarty Jones).

“We were very happy with his breeze,” Tristan de Meric said. “We were expecting big things from him. He's been an awesome horse all year. We were planning on taking him down to Miami [to the Fasig Gulfstream sale], but obviously that didn't happen. We have always loved the horse. He's big, rangy and very athletic. He's a special horse to have in the barn.”

De Meric is selling the juvenile on behalf of breeder Tami Bobo, whose First Finds purchased Loveofalifetime with this foal in utero for $50,000 at the 2017 Keeneland November sale.

Despite the many uncertainties surrounding the sale, de Meric is hoping for a strong market.

“I'm optimistic,” he said. “There are a lot of people here. I think the market will be fair. People have been looking through the farms the last couple of months. A lot of these horses have been looked at on the farm. So people have a line on them already. I am hoping the market is fair for everybody.”

The Spring sale traditionally has a six-session breeze show, but in a nod to the steamy summer weather in Florida, it has been extended to seven days this year.

“I think it is the right move,” de Meric said of the extension. “Nobody wants to go out there at three in the afternoon-it's hot. It's hot at 10:30 in the morning. I think the extra day is the best thing they could have done.”

The breeze show continues through Saturday with sessions beginning daily at 7:30 a.m. The OBS Spring sale will be held next Tuesday through Friday and bidding begins each day at 10 a.m.