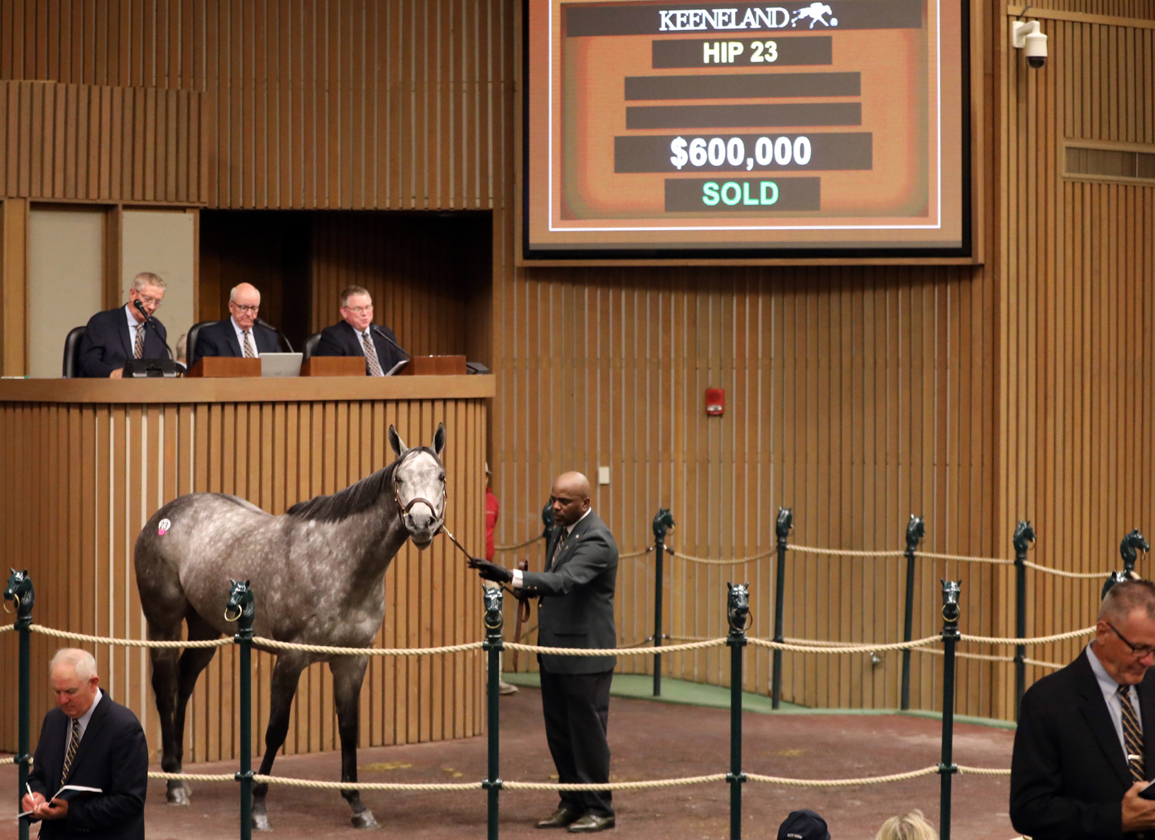 Acting Out (Blame), who most recently caused a 6-1 upset of the Carousel S. at Oaklawn Park Apr. 2 (video), was hammered down to Bill Farish, acting as agent for his parents Will and Sarah, to lead the way at Friday's Keeneland April Horses of Racing Age Sale held following the conclusion of the closing-day program at the racetrack a handful of steps up the hill.

Previously trained by Hall of Famer Jerry Hollendorfer for the ownership group of Sherman Racing Inc., Zivka Akin and Robert Hawkins, Acting Out won three of 10 starts in California and was placed in the Camila Urso S. sprinting on the turf at Golden Gate last year, but switched to the Arkansas oval this term and was a wire-to-wire allowance winner Mar. 11 before besting heavily favored 'TDN Rising Star' Frank's Rockette (Into Mischief) in the Carousel. She was consigned by Taylor Made Sales Agency as hip 23.

“She is a six-furlong specialist, so she will [continue] sprinting and hopefully be back here to [race in] the [GII] Thoroughbred Club of America S. in the fall,” said Farish. “We hope we can make some of the purchase price back [by racing her] before retiring her at the end of the year.

“When the catalog came out, she was one that just stood out in the catalog,” Farish added. “When we saw her–she looked fabulous, a beautiful mare, really correct. She looks like one who would have nice babies. [Her pedigree] goes back to a Stuart Janney III family, and we hope to breed her one day.”

Acting Out is out of a half-sister to Janney III's Grade III-winning turf mare Onus, also a daughter of Blame, and to the dam of the promising 3-year-old multiple graded-placed turf colt Limited Liability (Kitten's Joy), who flew home to win a grass allowance at Keeneland Apr. 16. The stakes-placed third dam Meghan's Joy (A.P. Indy) has left behind the likes of graded winners Ironicus (Distorted Humor), On Leave (War Front), Norumbega (Tiznow), Hunting (Coronado's Quest) and Quiet Harbor (Silver Deputy).

WATCH: Acting Out sells for $600,000 at Friday's Keeneland April Sale

The ELiTE-consigned Blue Devil (Uncle Mo) was the most coveted of the male racing prospects, selling to Rocket Ship Racing LLC, agent/William Denzik for $260,000. The 3-year-old was offered as hip 32 on behalf of his previous owners SF Racing, Starlight Racing, Madaket Stables, Siena Farm and Golconda Stable and trainer Rodolphe Brisset and made a favorable impression in his lone racetrack appearance to date, missing by a neck in a six-furlong maiden over the Turfway synthetic Apr. 2. The same connections were also represented by Blackadder (Quality Road) (hip 89), who was purchased by Claiborne Farm, agent, for $250,000. Hailing from a Stone Farm family, the colt holds an entry for the GI Preakness S. by virtue of his victory in the El Camino Real Derby Feb. 12.

Another Brisset trainee made his way down to the sales pavilion only hours after winning his maiden at the track a few hours earlier. Summer Anthem (Temple City) was offered by Gainesway, agent, as hip 104, and was snapped up by Kirk Wycoff's Three Diamonds Farm for $150,000 to continue his career. The 3-year-old gelding proved a tenacious winner of Friday's fourth race in a meet-fastest clocking for the 8 1/2-furlongs on turf.

As reported earlier, a share in Airdrie Stud's Upstart sold for $450,000 as the final hip up for bidding.

“From start to finish of the sale, the energy was strong and the enthusiasm at every level was really encouraging,” Keeneland Vice President of Sales Tony Lacy said. “Joining the race meet and sale and having them on one day really, really worked. The atmosphere was incredible with a real buzz. That's something we want to replicate and build on not just for the April Sale, but all sales moving forward.”

Added Keeneland's Director of Sales Cormac Breathnach: “It's so important to us to have the brick-and-mortar event built around the race meet and have the support we got up front from so many consignors and owners with really good horses. That first group–the 73 horses that were initially entered–really turned heads. We are incredibly grateful to them. That feeds into the race meet, and people see a chance to cash in or a chance to buy. And to be able to accommodate those horses that had run well during the meet in the sale showed our flexibility. To see it all come together is very rewarding.”

Keeneland will welcome buyers and sellers back to Lexington for its benchmark September Yearling Sale Sept. 12-23.