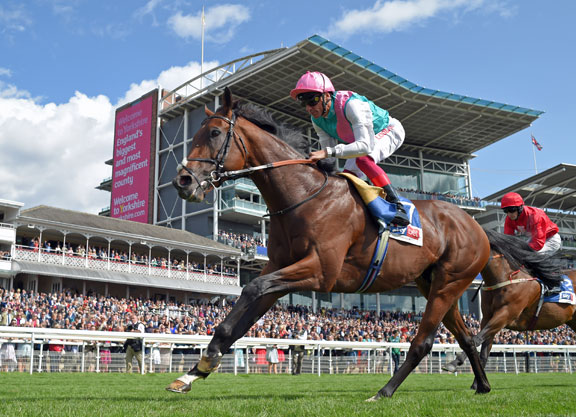 Exciting, disappointing and now re-established, Expert Eye (GB) (Acclamation {GB}) had little to gain and much to lose as he tackled Saturday's G3 Sky Bet City of York S. but in the end it was straightforward for Juddmonte's maturing class act. Considered Britain's leading juvenile after his dynamic display when winning the G2 Vintage S. at Goodwood last August, the bay's Classic campaign went wayward but he had shown when taking Royal Ascot's G3 Jersey S. and finishing runner-up in the G1 Sussex S. at Goodwood that he was far from derailed. Lobbing in the hands of Frankie Dettori with two behind throughout the early stages of this second encounter with older horses, the even-money favourite made ground easily to collar Arbalet (Ire) (Dark Angel {Ire}) passing the two-furlong pole. Although he had to graft to see off the 2012 winner of this race Gordon Lord Byron (Ire) (Byron {GB}), the homebred had a class edge over the veteran and that equated to a 1 1/4-length margin at the line. “He's very nice and relaxed now and the stalls situation has been resolved,” Sir Michael Stoute said. “He seems in a good frame of mind. We just need to eke out a little more improvement. He's not too far off group one now.”

Expert Eye's Vintage performance had the stamp of a colt destined to make himself a household name, but when he panicked in the gates ahead of the G1 Dewhurst he was left with the repercussions. After a winter of stalls work to overcome his phobia, he returned with a faultless run through the preliminaries for the G3 Greenham S. What seemed to be missing in his effort when runner-up in that seven-furlong Classic prep at Newbury Apr. 21 was the initial panache that had onlookers jumping around at Goodwood, but he nevertheless attracted support ahead of the G1 2000 Guineas. Only 10th in the May 5 Classic with no further loading issues, he went to the Royal meeting with a point to prove and with the aid of the gifted James McDonald stormed back to the forefront in the June 20 Jersey at this trip. While the Sussex was supposed to answer the question as to whether a mile stretches him or not, the lack of an end-to-end gallop kept the debate open and despite this smooth win the doubts will persist until he proves otherwise at that trip.

Stoute is convinced Expert Eye has the requisite stamina for an extra furlong, but was keeping his options open. “He'll get a mile. I'm not worried,” he stated. “I'd be looking at France for the next step–the [G1 Prix du] Moulin [at ParisLongchamp Sept. 9] or the [G1 Prix de la] Foret [at ParisLongchamp Oct. 7].” Teddy Grimthorpe added, “He's on a learning curve still, but he's in a much better place. He's more comfortable in himself. He's more mature, which is great, so it gives us hope for the future.” Dettori was surprised at how he behaved in his hands for the first time. “I've been watching him and he's been very keen all the time, but he was so relaxed today I was a bit worried,” he explained. “He picked the leaders up very quickly and is going the right way now and is beginning to learn to do it the right way round. This was a confidence boost and I'm sure he'll pick up a good one.”

Expert Eye's dam's side is fast and a mile on turf is probably as far as the family members want to go, with his second dam Quest to Peak (Distant View) being a full-sister to the dual GI Beldame S. and GI Ogden Phipps H. heroine Sightseek, successful in seven grade I races in total. Also a half to the GI Yellow Ribbon S. and GI Gamely Breeders' Cup H. winner Tates Creek (Rahy), she was responsible for Special Duty (GB) (Hennessy) who was Europe's champion 2-year-old filly after winning the G1 Cheveley Park S. and G2 Prix Robert Papin. She later stayed a mile well enough to be second in both the G1 1000 Guineas and G1 Poule d'Essai des Pouliches before remarkably being awarded both Classics by the Newmarket and Longchamp racecourse stewards. The family also features the operation's Etoile Montante (Miswaki), winner of the seven-furlong G1 Prix de la Foret and the GII Palomar Breeders' Cup H. and GIII Las Cienegas H. Exemplify's 2-year-old filly by Kingman (GB) is named Clerisy (GB), while she also has a yearling colt by Dark Angel (Ire) and a colt foal also by Kingman.