All Accelerate in Pacific Classic 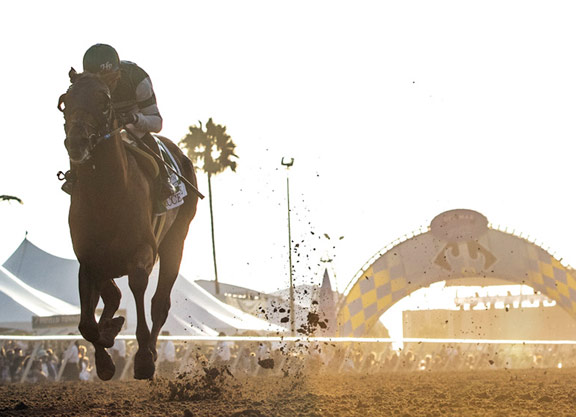 Hronis Racing’s Accelerate (Lookin At Lucky) put on a show in Saturday’s $1 million GI TVG Pacific Classic, continuing his domination of the California handicap division with a tour de force in this “Win and You’re In” event for the GI Breeders’ Cup Classic. Off a step slow, the 2-5 favorite kept close tabs on the leaders from the three-path as Roman Rosso (Arg) (Roman Ruler), who was making his U.S. debut for Bob Baffert, led Prime Attraction (Unbridled’s Song) through early fractions of :23.05 and :46.69. Drawing alongside that duo on the backstretch, Accelerate took control just past the three-eighths pole and instantly shot clear, rolling home under a hand ride to win by 12 1/2-lengths, the largest winning margin in Pacific Classic history. GI Stephen Foster H. victor Pavel (Creative Cause) completed the exacta and Prime Attraction held on for third. It was the fourth win of the day for East Coast-based pilot Joel Rosario, who made the trip in from Saratoga to fill in for recently injured Hall of Famer Victor Espinoza.

“It was very impressive,” said winning conditioner John Sadler. “He’s been good on this track, he’s won stakes here every year. The only thing I was nervous about was Joel [Rosario]. I told him ‘Ride him like he’s the best horse. Don’t let anything cheap get in front of you. Stay in contact with the leaders.’ He did that so I knew [Accelerate] would kick in well.”

“He’s a very nice horse,” said Rosario, who won this race in 2012 with Dullahan (Even the Score). “He put me in a good place and took me to the outside and we went from there.”

Accelerate had his coming out party of sorts at Del Mar last year when romping by 8 1/2 lengths in the GII San Diego H., scoring a major upset over champion Arrogate (Unbridled’s Song), who finished fourth that day in his first start since an unbelievable victory in the G1 Dubai World Cup. Third behind the Baffert-trained Collected (City Zip) and Arrogate in last year’s Pac Classic, the chestnut failed to fire next out when ninth in the GI Breeders’ Cup Dirt Mile at this venue Nov. 3.

Second in the GII San Antonio S. at Santa Anita Dec. 26, he kicked off this season with a 1 3/4-length defeat of Prime Attraction in the GII San Pasqual S. in Arcadia Feb. 3 and followed suit with a his first top-level victory in the GI Santa Anita H. Mar. 10. A neck second to Grade I winner City of Light (City Zip) in the GII Oaklawn H. Apr. 14, Accelerate bested the reopposing Dr. Dorr (Lookin at Lucky) by 4 1/4 lengths last time in the GI Gold Cup at Santa Anita May. 26. Lava Man (Slew City Slew) swept the Big ‘Cap, Gold Cup and Pacific Classic in 2006 and Game On Dude (Awesome Again) completed the same triple in 2013.

Out of SP Issues, Accelerate is a half-brother to SW & GISP Daddy D T (Scat Daddy) and SW & GSP Amarish (Scat Daddy). Issues is also responsible for the sophomore filly Daddy Issues (Scat Daddy); the juvenile colt Communicator (Bernardini), a $300,000 KEESEP purchase by Twin Creeks Racing; and a yearling colt by Bernardini, who sells as hip 56 during Keeneland September’s opening session. The 15-year-old mare was bred back to Curlin earlier this term. The winner also hails from the Joe Shields family of GISW Wagon Limit (Conquistador Cielo) and MGSW & MGISP Puzzlement (Pine Bluff).