Home » Archive » Shared News » A Violent Country, A Kidnapping, A New Life in the U.S.

A Violent Country, A Kidnapping, A New Life in the U.S. 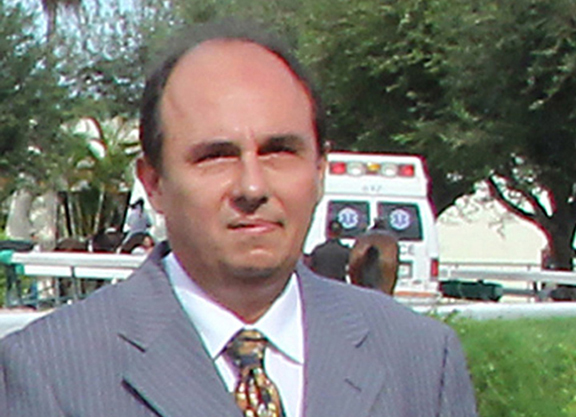 MIAMI GARDENS, Fla.–The cliche isn’t always true. Trainer Antonio Sano, whose multiple stakes winner Gunnevera (Dialed In) will enter 2017 as one of the top 3-year-old colts in training, did not dream of winning the GI Kentucky Derby. He was merely focused on winning the next race at Hipodromo de Valencia in Carabobo, Venezuela, something he did quite often. With 3,338 winners in his native country, he remains the leading trainer in the history of Venezuelan racing. He was known as the “Czar Valencia Hipismo,” the King of Valencian horse racing.

Sano never won a 3,339th race in Venezuela; he was kidnapped in 2009 and held for 36 days before his wife paid a ransom to free him. It was the second time he had been kidnapped, the first ordeal lasting only four hours. For his safety and the safety of his family, he felt he had no choice but to leave.

Within a few months, he showed up on the backstretch at Calder Race Course without any horses but with faith that he could start over again and build a new life.

“After they kidnapped me, I took my wife and kids and came here,” said Sano, who is still learning the language of his new country. “It was very scary. Scary for me and my family.”

He said he does not like to talk about the kidnapping and will not reveal how much money had to be paid to secure his freedom. His wife, Maria Christina, who taught engineering at Carabobo University, will reveal a few details.

“It was horrible, the worst time in my life,” she said. “They wouldn’t give him food or anything to drink. My little daughter (Marielena, who was 3 at the time) would not talk, would not speak. She was frozen. My wonderful time was when he was freed and I saw that he was fine, safe. There were no problems. Many times the kidnappers will cut their fingers off. I was worried they would kill him because you have no idea what happened to him.”

Venezuela is among the most dangerous countries in the world. Because many people do not report their kidnappings to the police, accurate data is hard to come by. In 2009, the year Sano was kidnapped, leaked government documents estimated there were 16,917 kidnappings in the nation. The violence that is rampant in Venezuela is linked with the changes in government known as the Bolivarian Revolution that were initiated by former President Hugo Chavez. Chavez’s policies led to corruption, poverty, rampant inflation, violence and a sense that the government was not interested in protecting the wealthy from criminals. As someone who made a good living and whose wife was a professional, Sano was a prime target for the kidnappers.

According to a CBS News.com report titled “The Horse Mafia of Venezuela,” gambling rings have been known to threaten and kidnap Venezuelan jockeys in order to fix races. It also reported that a top horse named Rio Negro (Ven) (Seek Smartly) was poisoned with an overdose of cortisone prior to the 2014 Army Day Derby so that gamblers could make money betting against him.

Once freed, Santo went directly to Italy, where he had family, and considered training there. But with the racing industry in that country in turmoil he turned to America and arrived in 2010.

“It was a new life,” he said. “But I had to think of my kids. I had a lot going for me in Venezuela, but what was most important was to keep my kids and my wife safe. I promised my wife I will never go back. I cannot go back. It is not safe.”

He started here with nothing, but some of the same owners he trained for in Venezuela were willing to give him a chance, as were Venezuelans residing in the U.S. who knew of his reputation. He started his first horse in the U.S. on April 3, 2010, in the first race at Gulfstream. Two races later, he had his first U.S. winner, with a $10,000 claimer named Scorbit (Scorpion).

From there, Sano’s stable grew consistently. In 2011, he won 75 races and had his first graded stakes winner with Devilish Lady (Sweetsouthernsaint), who won the GIII Azalea S. at Calder. He would also win graded stakes races with City of Weston (Holy Bull) and Grand Tito (Candy Ride {Arg}). He’s also won numerous training titles at Gulfstream and Gulfstream Park West, where he was the leading trainer in each of the last three years.

But until Gunnevera came along, he had not had a horse that could put him in the national spotlight.

Gunnevera is owned by Peacock Racing Stable, which is compromised of Venezuelans Solomon Del-Valle and Guillermo Guerra and Jamie Diaz of Spain. The colt was purchased for just $16,000 at Keeneland September in 2015. It took him three starts to break his maiden but he followed that up with a victory in the GII Saratoga Special S. at Saratoga. Sano sent him from there to Keeneland for the GI Breeders’ Futurity, where he finished fifth.

“The Keeneland track was not good for the horse. It was too soft,” Sano said. “Churchill Downs is a different track, it is normal. I think the results will be good there.”

Gunnevera redeemed himself in the GIII Delta Jackpot S., where he made an eye-catching move under Javier Castellano to win the $1 million race by 5 3/4 lengths.

Castellano is also from Venezuela, but said he never rode for Sano there because he was based at a different track. What he knows of him is from his time in the U.S., and he has been impressed.

“I know he had an incredible record in Venezuela,” Castellano said. “But I didn’t meet him until he came here. Here, I’ve ridden for him a lot and I think he is a great trainer, one of the top trainers in the business. He knows his horses very well and he has proven himself here. It would be tremendous to ride a horse in the Kentucky Derby for a trainer from Venezuela. You’d have the owners, the trainer and the jockey from Venezuela. That would be amazing.”

He said he now understands the significance of the Derby and that winning it would be the greatest achievement of his career. But he doesn’t come across as someone obsessed with it or someone who is ready to get out of Florida, where he has 58 horses under his care. He doesn’t need to be the next Todd Pletcher or Bob Baffert, and he is not looking to relocate to New York or California. Sano has what he wants.