A “Toxic” Situation Leads to Uncertainty Over Stormy Liberal's Future 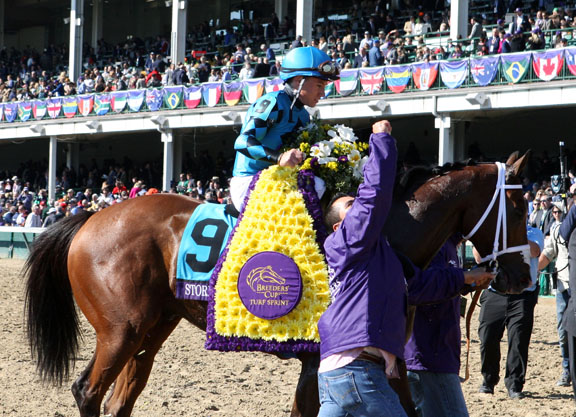 A day of finger pointing and controversy involving a two-time GI Breeders' Cup Turf Sprint winner began early Tuesday when trainer Peter Miller issued a statement announcing that he will no longer be training Stormy Liberal (Stormy Atlantic) after recommending that he be retired. The statement noted that the 7-year-old would be turned over to a new trainer.

The horse's current owner, David Bernsen called Miller's statement “unfair” and “disingenuous.” Bernsen said that Miller had entered Stormy Liberal in a race toward the end of the Bing Crosby meet at Del Mar that did not fill and that he never made mention of retiring the gelding until after Stormy Liberal was removed from his barn.

“I don't wish anybody bad, but, man, just be professional about it,” Bernsen said. “Don't fire out some press release and the next thing I know I'm getting bashed on social media. If the horse hadn't left his barn, I don't know that he would be talking about how he wanted this horse retired. I don't want to inflame the situation. All I want is to be is done with Peter Miller.”

The horse had been campaigning for Gary Hartunian's Rockingham Ranch and Bernsen before a poor effort in this year's Breeders' Cup Turf Sprint raised the issue of whether or not he should be retired. Hartunian thought the best course of action was to retire the horse, while Bernsen wanted a decision put on hold until an outside party could evaluate the gelding. When the two owners could not agree, Bernsen bought out Hartunian, and he will be making the final decision regarding whether or not the horse will be retired.

The one thing everyone agrees on is that the relationship between Bernsen and Miller is not a good one. Said Hartunian: “The whole thing started to get toxic and I was in the middle of it.”

The TDN reached out to Miller for a reaction to Bernsen's comments, but, as of the deadline for this story, the trainer had not responded.

“I am sorry to announce that Stormy Liberal will be leaving our barn to continue racing under another trainer,” it read. “Both my veterinarian and I believe the horse should be retired. In fact, we had already started inquiring for him to retire to Old Friends so he could live out his days in comfort and good care, and allow visitors to enjoy him up close.”

Though careful not to take sides in the dispute between Bernsen and Miller, Hartunian said he also felt the time had come to retire the horse.

“We brought him back this year and it just wasn't him,” Hartunian said. “He was letting horses pass him that shouldn't have been passing him. At some point you have to retire a horse and call it a day. David thought otherwise and he had the option to buy me out. Peter and David, they had different views about what to do with the horse.”

Stormy Liberal was claimed for $40,000 in 2016 by the Miller, Hartunian, and Bernsen team. Some 13 months later, he won his first of two Breeders' Cup Turf Sprints, winning the race at Del Mar by a head. He defended his title a year later at Churchill Downs, winning by a neck. Stormy Liberal returned to make seven starts this year, but failed to win a race. In his most recent outing, he was eighth in the 2019 Breeders' Cup Turf Sprint.

“It is very rare to claim a horse for $40,000, win two Breeders' Cup Races and earn the prestigious Eclipse Award,” Miller said in his statement. “It is my professional opinion that he has given and accomplished enough. While the owners certainly have every right to make these choices, and I respect that, I would like the record to show that I was not in favor of this decision. Stormy has been very special to our team, and to me. We will miss him and hope for the best.”

Hartunian and Bernsen agree that after the Breeders' Cup they had different ideas about what to do next with Stormy Liberal. Bernsen said he was not necessarily intent on running him again, but thought the most prudent course was to have him evaluated before making any decisions. With Bernsen now in full control of the horse, Stormy Liberal has been sent to David Scanlon's training center in Ocala, where a fresh set of eyes will have a look at him.

“I consider Scanlon a pretty good judge,” he said. “We're going to get him down there in a situation where we can look at all the options and then decide. I've had enough success. I do not need to run a horse in an allowance race somewhere. I may well retire Stormy. All I want to do is have the horse evaluated first.”

Bernsen also said he had advocated for Stormy Liberal to be sent to the Rood and Riddle equine clinic after the Breeders' Cup for further evaluation, but was rebuffed.

In addition to his comments made to the TDN, Bernsen released a statement of his own in which he said he had misgivings about his relationship with Miller after the trainer was fined $2,500 over alleged remarks he made in 2018 to a female backstretch employee that involved “derogatory words about a licensee's unborn baby.”

“With regard to the press release issued by Peter Miller after Stormy Liberal was removed from his care…there are two sides to every story. I have had growing personal concerns in doing business with Peter Miller for a couple of years since a well-publicized incident between he and a female employee at San Luis Rey Training Center,” Bernsen said in his statement.  “Over time, that combined with other concerns, the relationship eroded.”

Together, Bernsen, Rockingham Ranch and Miller have enjoyed several wins at the highest level of the sport, including a victories in the 2017 and 2018 GI Breeders' Cup Sprint with Roy H. (More Than Ready). Bernsen said he has been in the process of ending his ties with Miller and now has just two horses he co-owns with Rockingham Ranch, Roy H. and Wrecking Crew (Sky Kingdom).

“We will see what the fall out from this whole thing is,” he said. “It might be in everyone's best interest if I take the high road and get out of those two horses. I've got plenty of other good ones. There's life after Peter Miller.”