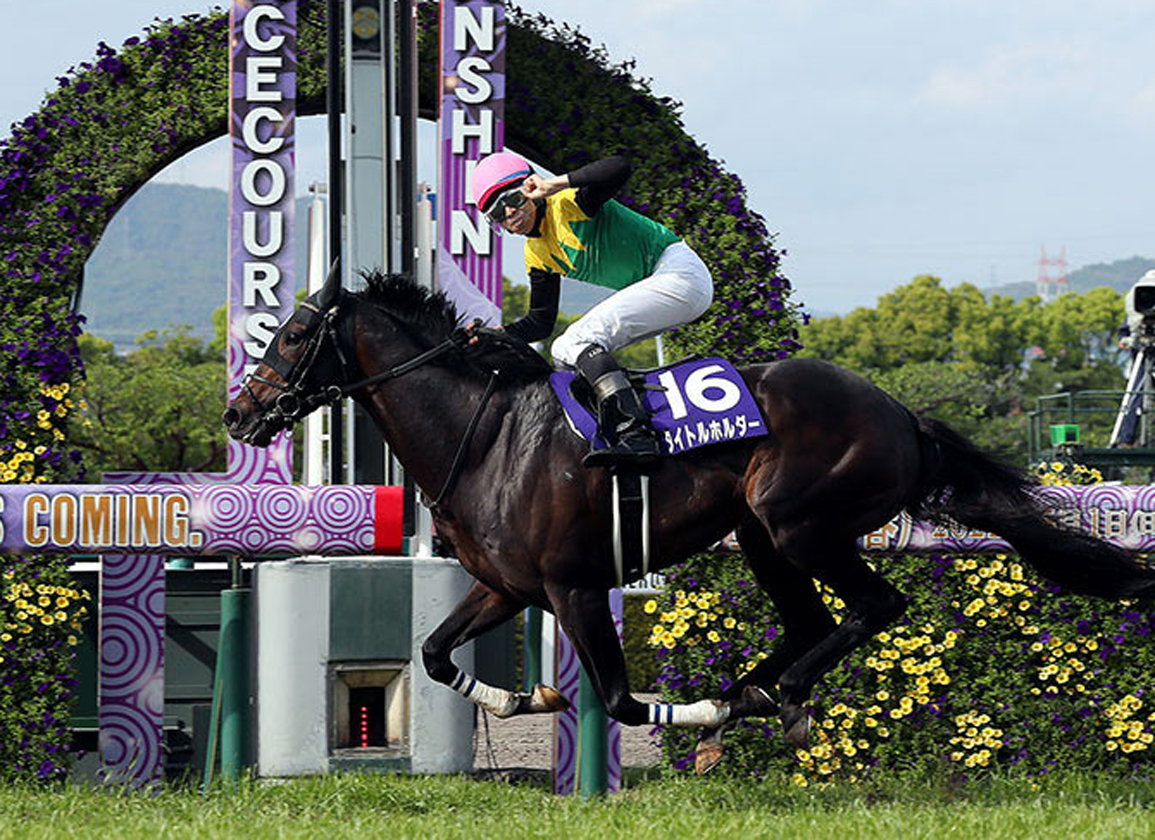 Second choice in the wagering at 7-2 behind the even-money pick Deep Bond who also won the G2 Prix Foy when sent abroad for a crack at the G1 Prix de l'Arc de Triomphe last term, the Hiroshi Yamada colourbearer was immediately hustled up to the head of affairs by Kazuo Yokoyama. Crescendo Love (Jpn) (Stay Gold {Jpn}) kept a close eye on Titleholder, while Tagano Diamante (Jpn) (Orfevre {Jpn}) sat third and Deep Bond perched in fourth alongside T O Royal.

Left to his own devices with an open-length lead, Titleholder covered the first half-mile in :48.50 and Yokoyama let up on the gas approaching the half-way point to give his colt a breather. Meanwhile, the stalking horses had to contend with the riderless Silver Sonic (Jpn) (Orfevre {Jpn}), who had dropped his jockey at the break and forged up the rail to sit second in Titleholder's wake. The leader dropped the hammer on his rivals several furlongs later and covered 2400 metres in 2:27.90.

Able to maintain his rhythm from there, the 4-year-old had built up too much cushion and strolled across the line seven lengths to the good of Deep Bond, who had taken over from a leg-weary T O Royal in the final 100 metres, with a length separating them on the line. Titleholder covered his final half-mile in :48.30, with all bar the final furlong navigated in under :12 seconds per furlong.

It was an especially poignant first Group 1 win for Yokoyama, who became the third generation of his family to win the Tenno Sho (Spring). Yokoyama's grandfather Tomio was aboard Mejiro Musashi (Jpn) (Wallaby {Fr}) in 1971, while is father Norihiro enjoyed a treble in the race-Sakura Laurel (Jpn) (Rainbow Quest) in 1995, Ingrandire (Jpn) (White Muzzle {GB}) in 2004 and Gold Ship (Jpn) (Stay Gold {Jpn}) in 2015.

“I felt that he was in good form when I rode him in the post parade, so I just believed in him and concentrated on riding him in [a] good rhythm,” said Yokoyama. “We were able to slow down the pace in the backstretch to conserve his stamina and I was not worried about the horses behind us in the last stretch. I'm happy that I was able to win this race with Titleholder, rather than being able to win my first Group 1 title. I think he will get stronger and stronger going foward.”

First in the G2 Hochi Hai Yayoi Sho Deep Impact Kinen in March of 2021, the bay was second to eventual Japanese Horse of the Year Efforia (Jpn) (Epiphaneia {Jpn}) in the G1 Satsuki Sho (Japanese 2000 Guineas) before a pair of unplaced runs in May and September. In October of 2021, he secured the G1 Kikuka Sho (Japanese St. Leger) with Yokoyama's brother Takeshi at the controls, his first try beyond 2400 metres. Kazuo picked up the ride on Titleholder in the Dec. 26 Arima Kinen, as his brother is the regular rider for Efforia, and reported home fifth, once again to that rival. The 4-year-old colt warmed up for the Tenno Sho with a victory in the 2500-metre G2 Nikkei Sho on Mar. 26.

One of a quartet of black-type winners for Japanese Champion 3-Year-Old Colt and dual Classic scorer Duramente, Titleholder is his most decorated runner to date. Stars On Earth (Jpn) is the other Group 1 winner for her sire, having taken the G1 Oka Sho, while Arrivo (Jpn) won the G3 Kokura Daishoten and was third in the G1 Osaka Hai. A grandson of G1 Derby hero Motivator, Titleholder is one of 10 black-type winners–five group–for the stallion as a broodmare sire and only Group 1 victor.

Picked up by LEX for just 30,000gns at the Tattersalls October Yearling Sale from Catridge Farm Stud, agent, in 2009, Mowen did her best running at three and four, winning as short as 1200 metres and up to 2600 metres for five wins from 22 starts on the JRA circuit. Mowen's first foal, the winning Melody Lane (Jpn) (Orfevre {Jpn}), was fifth in the 2019 Kikuka Sho and finished ninth to Titleholder on Sunday. She produced a dead foal in 2017 prior to foaling the Tenno Sho winner. She has not had a live foal since Titleholder in 2018, although she has visited in successive years Gold Ship (Jpn), Victoire Pisa (Jpn), and Duramente. A half-sister to listed winner and dual Group 3-placed Zato (Ire) (Zafonic) and black-type winner Krispy Knight (GB) (Kris {GB}), Mowen was covered by Kizuna (Jpn) last spring, but once again failed to add to her brood.

Farther back in the family is dual listed winner and G1 Lockinge S. third Centre Stalls (Ire) (In the Wings {GB}) and Classic winner On The House (Fr) (Be My Guest). That 1979 filly was successful in the G1 1000 Guineas and G1 Sussex S., and second and third in the G1 Cheveley Park S. and G1 Irish 1000 Guineas, respectively.