A New Rising Star For Frankel As Al Mubhir Impresses 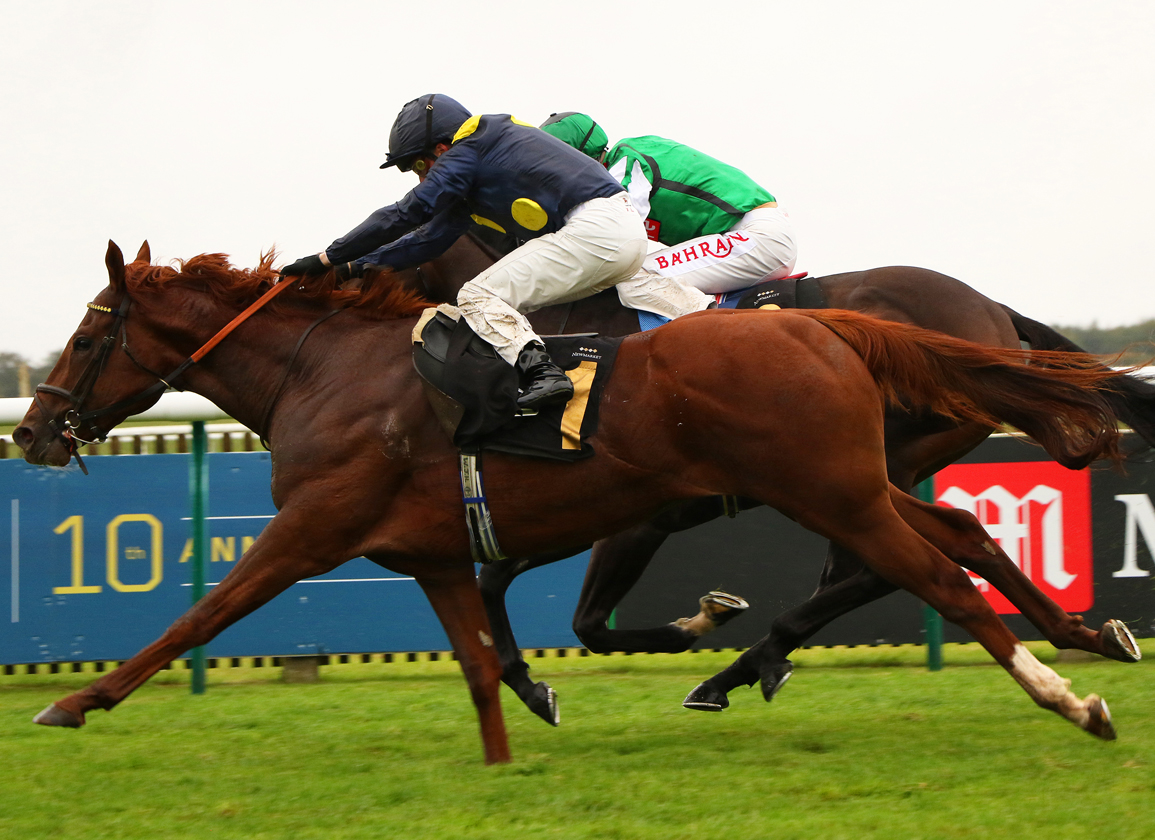 Frankel (GB) already had 18 TDN Rising Stars to boast of before Saturday and there was another to add to the list on Newmarket's Sun Chariot undercard with the William Haggas-trained newcomer Al Mubhir (GB) showing abundant promise in the seven-furlong MansionBet Beaten By A Head Maiden S. Sent off at 9-2, Sheikh Juma Dalmook Al Maktoum's homebred first foal out of his G3 Darley S. winner Muffri'Ha (Ire) (Iffraaj {GB}) was held up early worse than mid-division by William Buick racing on the wing. All hands and heels running down into the “dip” in pursuit of the smooth-travelling 7-4 favourite Filistine (Ire) (Almanzor {Fr}), the chestnut picked up that rival inside the last 100 yards en route to a comfortable length success, with 1 1/4 lengths back to the eye-catching First Officer (Ire) (Galileo {Ire}) in third as the debutantes dominated.

Haggas, who enjoyed eight winners across Britain and France on the day, also later oversaw the gallop of the G1 Champion S. hero Addeybb (Ire) (Pivotal {GB}) and said of Al Mubhir, “He is a nice horse and he did well to win today. I don't know how good the opposition was, but his jockey liked him. He is nice. He looked a bit spicy after the race, so we will have to be careful but he is a big strong colt so he will be alright. He may need some more experience, but I wouldn't want to send him over the top either so we will see what the owner wants to do. He handles the ground well and picked up well on it.”

Muffri'Ha had a fair share of talent, peaking in the Darley but also successful in the Listed Rosemary S. again at this venue and in two renewals of the Listed Fleur de Lys Fillies S. on Lingfield's Polytrack. Also third in the G1 Jebel Hatta, G2 Cape Verdi and G2 Balanchine, she proved versatile regarding ground conditions and was always going to be a top broodmare prospect. Her dam is the G3 Ridgewood Pearl S. winner and G2 Windsor Forest S. third Grecian Dancer (GB) (Dansili {GB}), who is a half to the G2 Flying Childers S. and G3 Molecomb S. winner Wunders Dream (Ire) (Averti {Ire}) and to the second dam of this year's G2 Richmond S. scorer and G1 Prix Morny third Asymmetric (Ire) (Showcasing {GB}). The fourth dam Musianica (GB) (Music Boy {GB}) produced the G1 Queen Elizabeth II Cup hero Mensa (GB) (Rudimentary) and another high-class Hong Kong runner in Firebolt (Ire) (Flying Spur {Aus}). Muffri'Ha's yearling colt is by Dubawi (Ire), while she also has a filly foal by Shamardal.