A Most Unusual Saratoga Meet Set to Begin Thursday 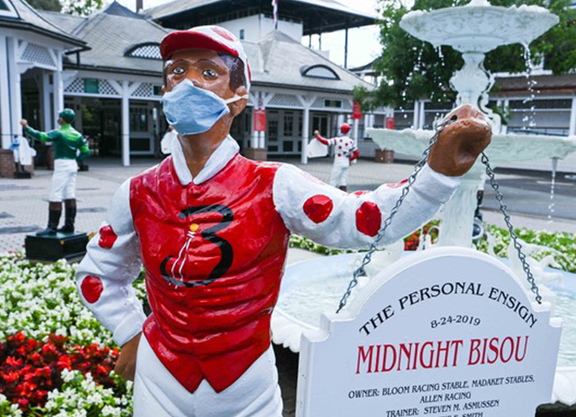 SARATOGA SPRINGS, N.Y. – Even though he is healthy and enthusiastic, 91-year-old Gus Ziamandanis will not be able to attend his 70th consecutive opening day at Saratoga Race Course on Thursday, July 16. His quest for a remarkable personal milestone was stopped by New York State's coronavirus guidelines that prohibit spectators at professional sporting events.

When he understood that it was unlikely that he would get into the grounds for the 10-race opener, Ziamandanis made a reservation for a table at Capital OTB's Clubhouse Race Book in Albany, 33 miles south of the track. Capital OTB's venue is close to Ziamandanis's home in the Albany suburb of Colonie. While Ziamandanis, who played handball until the gyms were closed by the pandemic this winter, is disappointed that he won't extend his streak, he is realistic.

Ziamandanis and millions of other racing fans will watch from afar. Some, no doubt, as close as across the street at King's Tavern or in other Saratoga-area bars and restaurants in this season like no other at America's oldest racing venue. Concerned that people would congregate along Union and Nelson avenues to get a glimpse of the action from the sidewalks, Saratoga Springs city officials asked the New York Racing Association to install temporary coverings to block the view.

“The critical part of this meet is that we celebrate racing, but we celebrate it at home,” Saratoga Springs Public Safety Commissioner Robin Dalton said at a press conference. “The city cannot have people come to the track and try to watch racing.”

She continued. “In fact, we have asked NYRA to put up privacy fencing around the track so you won't be able to see in, and they have been very cooperative and done that. That is for the collective safety of the community and also to make sure we can continue to celebrate racing this year and every year to come.”

The New York Racing Association's 40-day meeting is the 152nd summer of Thoroughbred racing in Saratoga Springs and the first time without spectators. The inaugural season was held in 1863 on the Horse Haven track on the opposite side of Union Avenue from the now-historic site that opened the following year. This will be the 75th consecutive season of racing at the Spa since it reopened in 1946 following three seasons of Saratoga-at-Belmont meetings during World War II. The track was closed in 1896 when its nefarious owner Gottfried Walbaum was in a tussle with The Jockey Club over dates. In 1911 and 1912, the New York tracks did not operate due to a legislative crackdown in gambling.

This year's Saratoga meet will feature 71 stakes worth $14.45 million, with 39 graded stakes and 18 Grade 1s, including the historic GI Runhappy Travers, this year a Kentucky Derby prep on August 8. For the second year in row, Saratoga will be closed on Mondays and Tuesdays. It will open with four racing days, and then run five days per week for six weeks before reaching its conclusion with a six-day week that ends on Labor Day, Sept. 7.

As has been the case for more than 60 years, the GIII Schuylerville S. for 2-year-old fillies is on the 10-race opening day program. The co-feature this year is the GIII Peter Pan S., a race for 3-year-olds normally run at Belmont Park as a prep for the Belmont Stakes. Both races will be staged over the new dirt track installed during the off-season.

Due to the pandemic, NYRA changed the look of the Saratoga stakes schedule and cut purses following the closure of many tracks and the rescheduling of the Triple Crown. The $1 million GI Runhappy Travers, a fixture near the end of the meet for decades, was moved ahead three weeks to Aug. 8, so it could be a stepping stone to the Kentucky Derby on Sept. 5 and the Preakness S. on Oct. 3.

Jason Fitch and his brothers, Patrick and Adam, have operated the Saratoga City Tavern on Caroline Street downtown for 15 years. Six years ago, they took over King's Tavern, which was previously only open during the racing season, and now is open year-round. Their bars were closed for three months during New York's pandemic “pause,” but have been open since mid-June and now move into a racing season without fans. Like many other bars and restaurants in the city, the Fitch brothers' taverns will feature Saratoga racing on their TVs. This week they expanded the patio area and added an outdoor television at King's Tavern.

“It's going to be definitely a different season,” Jason Fitch said. “Whatever happens, we're going to embrace it. It's still going to be Saratoga with the track and the horses running. Unfortunately, we won't be able to walk across the street, go inside and enjoy a family day there. It's definitely going to be a unique season, but I think the community is going to come together.”

Fitch said he has heard from customers who visit Saratoga for the races, and said some have told him they have scrapped their travel plans. Others, though, may drop in for a weekend.

“It's just one year. Hopefully, everything is back to normal by next year,” he said. “Five years from now it's going to be 'remember that time when the track was closed?' It's going to be definitely a piece of history.”

On the almost-silent backstretch Wednesday morning , not far from a barn filled with empty stalls, veteran trainer John Kimmel described the atmosphere.

“Yesterday it felt like the first day after racing ended,” Kimmel said. “You know how it is? Everybody leaves and you come out here, there are a few horses on the racetrack, it's nice and quiet and you go, 'Wow, it's really nice here.' But to know that's how it is before the meet has even started is kind of surreal. It certainly has lost the excitement and energy that you usually bring when you come here. You kind of get excited. Owners are all here. And the horses. The place is jumping with anticipation of a great racing season getting ready to commence. Right now, the trainers are just trying to cope with the situation.”

Ziamandanis, a first-generation American, was born and raised in Albany and the Navy veteran said he made his first trip to Saratoga in 1949.

“My sister's in-laws came up from Long Island and I had a car,” he said. “My mother and father wanted to show them the Saratoga track, so I took them.”

Two summers later, Ziamandanis started what would become a seven-decade streak of making it to the track for the Saratoga opener. Thirteen U.S. Presidents have served during Ziamandanis's run, which began on Monday, August 6, 1951. In those days, racing was prohibited on Sundays in New York. The downstate meet would end on Saturday and the Saratoga Association would open its 24-day season on Monday. The 1951 Spa opener drew a crowd of 16,692, the biggest following World War II. The horse named Vantage, ridden by Dave Gorman, won the first race by 4 ½ lengths.

In his early years as a fan, Ziamandanis said he came to the track with some of his buddies and stood at the end of the wooden grandstand built in the 1890s. A 700-foot extension was built in that area in the 1960s. As his plumbing, heating and air conditioning business based in Albany began to prosper, he was able to secure a table for the season in the clubhouse dining area. Ziamandanis has watched the track emerge from the doldrums and declining attendance of the 1950s and early 1960s and grow into one of the most popular and beloved tracks in the country. He has seen the stars, human and equine, who have made their way to Saratoga.