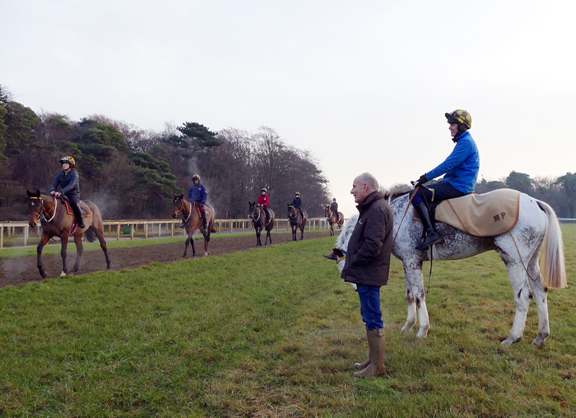 It's the most wonderful time of the year, apparently. For Sir Mark Prescott, however, that has nothing to do with Christmas.

“I loathe Christmas,” says Newmarket's longest serving trainer. “You've just got the yearlings going well and then their routine is disrupted.

“People say to me, 'Oh you're a flat trainer, what do you do in the winter?' This is the most important time of the year and a very busy one. It's all about education now.”

This morning at the equine academy that is Heath House consists of four classes of pupils all at varying stages of their education. Under the cover of darkness, first lot leaves the immaculate stable at the foot of Warren Hill for some fast work on Newmarket's Al Bahathri gallop. A mixture of juveniles, 3-year-olds and one 4-year-old, they are all horses who have been slower to come to hand or have suffered a setback in training which has meant that they've stayed in work for a winter campaign. Prescott's stable jockey Luke Morris, who is unfailingly present twice weekly for work mornings, rides Kirsten Rausing's homebred Seychelloise (GB) (Pivotal {GB}), who is being aimed at a Deauville Listed race between Christmas and New Year.

“The success of my day depends on how I planned the list,” says the trainer, and judging by the piece of paper he offers, hand-written and colour-coded in five different marker pens, the planning is pretty thorough. And it's not just list-planning which takes place at Heath House before first lot pulls out at 6.15am.

“I was up at 5am, read the papers, made your breakfast, my picnic for my trip to the stud later and Miss Rausing's tea for when she visits at evening stables,” Prescott adds, before divulging that his picnic consists of three different sandwiches––Mrs Morley's home-made paté, marmalade and honey.

First lot returns home as the darkness lifts and the sky blushes pink. It is the next three groups––all consisting of yearlings––which will teach Prescott as much about them as they are learning from his carefully planned routine.

“I've trained myself not to make my mind up about horses too early. It's like school––the very bright and the very stupid do tend to show themselves pretty early but the rest of them change all the time,” he notes.

The three batches of yearlings are all at slightly different stages of their tuition. They arrive broken in but in phases, and immediately undergo a week in the swimming pool and a week on the treadmill while being ridden in the indoor ride which is “exactly a furlong round” and contains two lungeing rings and starting gates.

“After five days they get their swimming certificate and then they get their treadmill certificate,” says Prescott as he watches second lot warm up in the ride. “While they are in here we start to walk them through the stalls so they get used to them.”

This set has graduated from being led by an older horse, and a different yearling will now lead the string, ridden by Rosie Jessop. “I like to teach them something new each day,” he adds.

The rolling door from Prescott's indoor ride opens on to the Heath at one of the busiest locations of the 2,500-acre training grounds, near the start of the Long Hill canter and where umpteen strings criss-cross to and from their daily exercise. It's a spot where plenty of seasoned horses, never mind yearlings, will find an excuse to jump around but that's not the case for the Prescott string, which files out in an orderly fashion as if they've been following the same routine all their lives. For the yearlings, it's only been a matter of weeks, but such is the attention to detail that goes into their formative months as racehorses, the young Thoroughbreds display a level of discipline that is repeated at all levels throughout Heath House. The stable's riders, smiling and polite, finish the answer to every question asked of them by their boss with the word “sir”. Time and again it feels like being back in the classroom and it is an image which Prescott himself often paints when describing his method of training horses.

“If you're a good school master, which I think I would have been except I hate children, they're all the same and you do what you can for each horse,” he says.

While horses in larger stables naturally have to be exercised in groups, it doesn't necessarily mean that they are all treated the same. A dwindling number of Newmarket stables now use hacks––often retired racehorses––to shepherd their strings, but Prescott is a stickler for tradition and at least two members of his staff are aboard hacks for each lot, watching the racehorses onto the canter or gallop. The assistants feed back vital information to the trainer as to the yearlings' demeanour as they approach their work, and the order in which they canter, or even the group they are in, is adjusted according to how each individual is coping with what he or she is being asked to do.

The educational aspect of Heath House doesn't end with the horses. There's a number of long-serving staff at the yard, crucially head lad Colin Nutter, who has worked for Prescott for 46 years, since he was 15. Assistant trainer William Butler is another loyal lieutenant and has been at Heath House for 17 years, a rare former pupil assistant who was allowed to stay on past the strictly allotted two years. Rob McDowall has just come to the end of his tenure in that coveted role for which there is a waiting list and, as he prepares to head to Lambourn to join Owen Burrows in January, he is spending two weeks showing the ropes to his replacement, Josh Hamer.

“I have 11 former assistants now training, including three of the best in France––Pascal Bary, Francois Rohaut and Christophe Ferland,” Prescott says with some degree of pride. “When Christophe came here, Pascal Bary rang me and said, 'I wish for you to be as horrible to him as you were to me'.”

Prescott enjoys his reputation as an irascible master but concedes that he is mellowing after 47 years with a training licence.

“I used to be so fiery,” he says and points with glee to a high window in his hostel from which he once dangled erstwhile stable jockey George Duffield by his ankles after he'd been rude to a fellow member of staff. “The one consolation of growing old is that you don't feel so cross over little things.”

Prescott, the 13th trainer to operate from Heath House since it was built in 1832, perhaps adopted some of his methods of running the stable from his predecessor, Jack Waugh, whom he assisted for three years on his arrival in Newmarket from Devon in 1966.

“It was the best time of my life as he was terrifying, so there was that mixture of fear and excitement,” he recalls.

The young Prescott must have made a good early impression, however, as Waugh decided to hand the stable over to him. “He said to me one day on Long Hill, 'I've had enough of this now. You'll be training these next season.' When I said that I wanted to be a National Hunt trainer he replied, 'Well, don't'.”

Waugh's illness meant that Prescott oversaw proceedings at Heath House on a temporary licence in 1969 before taking it on permanently the following year. There he has stayed, watching Newmarket grow from its then 35 trainers and 750 horses to around 80 different yards holding up to 3,000 horses in high season.

Now 68, Prescott will eventually hand over training responsibilities to Butler though, unlike Waugh, he shows no signs that he is falling out of love with the job.

“When I was 65 I said to William, 'I have two bits of bad news for you today. I've looked at my pension and it's worth nothing so I have to keep working, and worse still I came downstairs like a gazelle this morning'.”

The most recent Group 1 winner to emanate from the yard is Elite Racing Club's filly Marsha (GB), who gave lie to the oft-touted grumble that 3-year-olds struggle in the sprinting division when gaining a three-quarter length triumph in the Prix de l'Abbaye in October. By far the most famous sprinter to have graduated from the stable, however, is Pivotal (GB) (Polar Falcon) who, on the cusp of his 24th birthday, is now renowned as one of the best sires in Europe.

Understandably, as Prescott watches two Pivotal yearling fillies in action on Warren Hill, he recalls his former stable star with great fondness. “Pivotal was tremendous. What was interesting about him is that we had such a job to decide on his trip because when he worked so well before he'd ever run it was a compete surprise because he'd just flopped about before that. I rang Chris Richardson and said, 'You designed him, what distance does he want, because unless I'm mad, he flies'.”

The trainer's reputation is not built solely on sprinters, however. For Cheveley Park Stud, he has also trained the Classic winner Confidential Lady (GB) (Singspiel {Ire}), while Kirsten Rausing's famed grey sisters, Alborada (GB) (Alzao) and Albanova (GB), also graced his yard and are remembered there still, in bronze.

One great character who has thus far defied Prescott's disciplinarian tactics is Pallasator (GB) (Motivator {GB}), who has so far claimed two Group wins for the yard and can be described kindly as enigmatic. His trainer is less diplomatic when the subject of the 17.2-hand delinquent, currently on his winter holiday, is raised.

“It's wonderful here without him but he'll be back in the new year and Rosie [Jessop] always has to ride him as he behaves so badly,” he says with a grin. “He'll be eight in January and he's perhaps starting to settle down a bit. I think people enjoy the fact that he's such a good horse but such a horrible horse.”

He adds, “I enjoy trying to solve the puzzle of Pallasator but I don't necessarily enjoy him as an individual.”

Until the order of Prescott's beautifully preserved oasis of calm in central Newmarket is disturbed by the stayer's return, the trainer can spend this week pretending to be Scrooge and not enjoying Christmas. Of the big day itself, he says, “I'll be here on my own eating baked beans––it's great. I can get loads of things done because the phone won't ring. People are very kind and ask me if I'd like to come for lunch and I say, 'I'd absolutely hate to'.”

Bah humbug, then, for this week, but once the New Year is chimed in and the yearlings turn two, it's back to school for the team at Heath House. For the man charged with their learning, who loves nothing more than the lessons he has himself learned from the timeless rhythm of the racing year, it will indeed be the most wonderful time.