A Mix of Fear and Optimism at OBS in Coronavirus Era 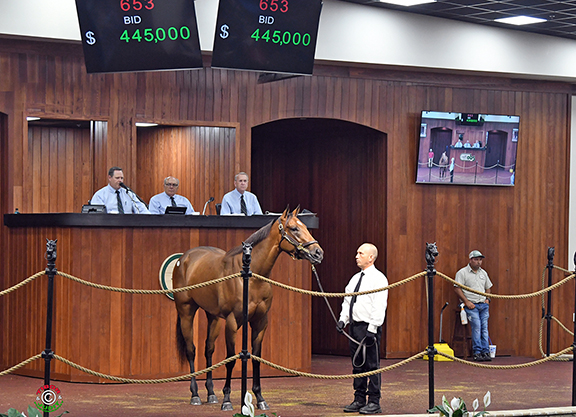 Following the announcement of the cancellation of the Fasig-Tipton Gulfstream sale on Friday afternoon, the atmosphere at the OBS March Sale was tense.

Becky Thomas of Sequel Bloodstock made an analogy. “There was a movie years ago with Jim Carrey called the Truman Show, where Jim Carrey did not realize he was actually the subject of a TV series. That’s the way I feel. We’re going through the motions, but we don’t really know if it’s real or not.”

Consignors gathered in the barns following the breeze show, expecting to hear the worse at any moment. Al Pike of Pike Racing said, “Everything is up in the air. We keep hearing all sorts of things, but we prepared for this sale and we’re here and hoping it all works out.”

Paul Sharp added, “With everything that’s going on with the Coronavirus and the stock market, it’s been a little tough to find optimism. But when you have good horses I think that people will always tend to gravitate towards them. And hopefully, we can pull this off.”

Later Friday evening, the Ocala Breeders’ Sales Company reiterated the decision that the sale would go on, helping soothe the nerves of consignors and buyers alike.

Following two days off to allow buyers a chance to look through the barns following the breeze show, the two-day sale will begin Tuesday morning at 10:30.
Many consignors expressed their desire to get their horses through this sale in particular.

Michele Hemingway of Hemingway Racing said her consignment comes to this sale because of the importance placed on a quality physical. “I think that OBS has done a really good job of making this a showcase of physicals and showing that a horse can maybe not have a $300,000 pedigree but can has the physical conformity to be a graded stakes-winning horse.”

Hemingway said she was particularly excited to sell an Mshawish colt, Hip 79. “He’s by first-crop sire Mshawish and is out of Funny Pepper. Funny Pepper is the first foal out of Peppers Pride, who was won 19 times in New Mexico and was undefeated for quite some times. Since the catalog, her first foal was a winner and her second foal broke his maiden first time out in New York.”

Paul Sharp said he prepares for the March sale as a springboard for the rest of the sales season. “It’s a good jumping point for us. It’s the first sale of the year, and typically everyone is enthused.

We need to have some momentum for the rest of the year, and it’s a good place to get it started,” Sharp said as he stood alongside his Uncle Mo filly, Hip 443.

The filly worked in 10.1. “She’s trained absolutely great for me all year. Uncle Mo is doing very well, and we’re excited about her.

Thomas recalled the successful results her consignment had last year at this sale. “We sold a two million dollar horse out of this sale last year, and he’s running in the Louisiana Derby. Steve Asmussen is the trainer and he keeps telling me how good he’s doing, so we’re excited.”

This year, Thomas said she was looking forward to the sale of a full-sister to GI Breeders’ Cup Filly and Mare Sprint Bar of Gold (Medaglia d’Oro). “She worked 10 flat yesterday, so we are pretty excited about her.”