A ‘Men’ Among Boys in Fountain of Youth 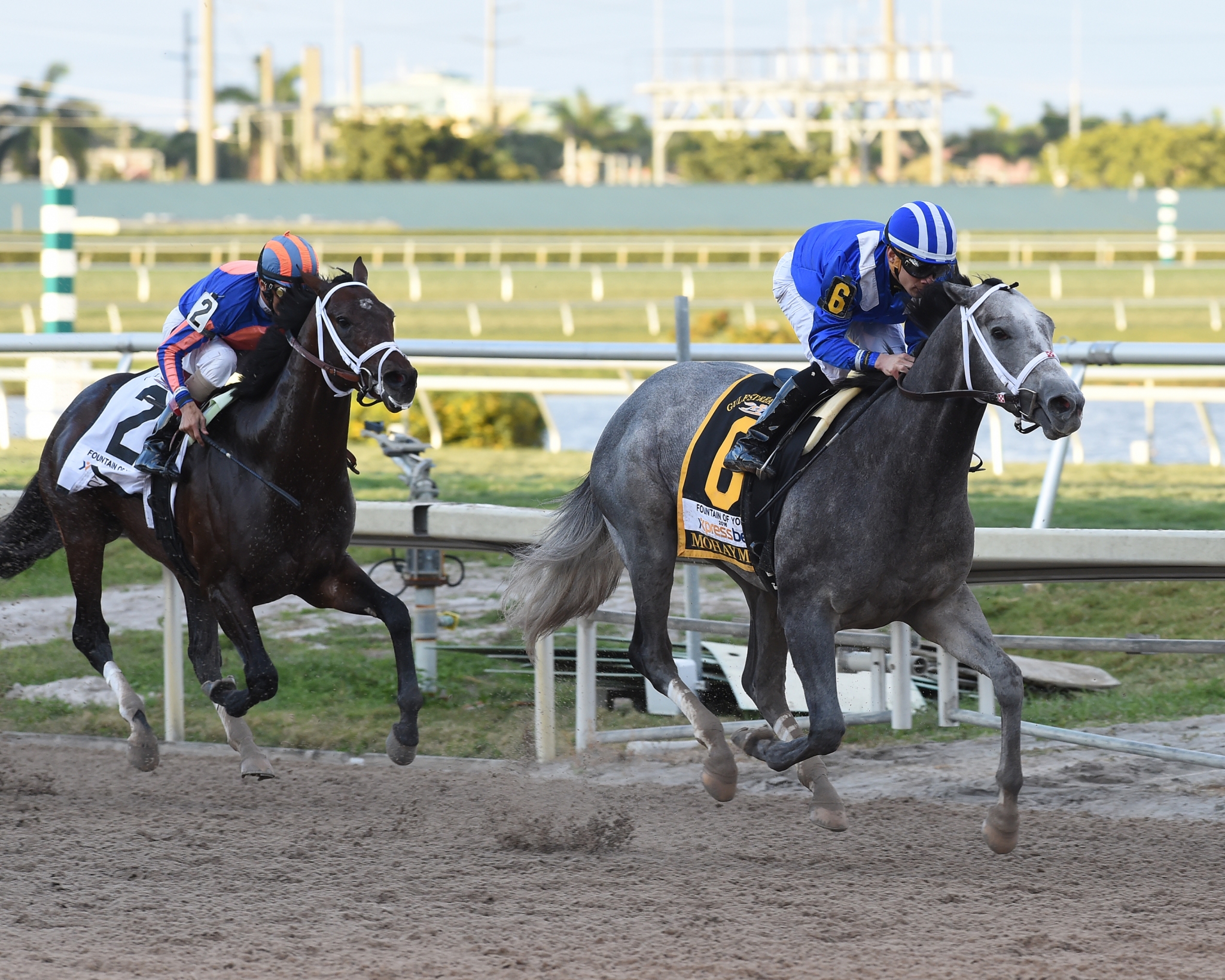 On paper, at least three of the four horses lined up against Shadwell Stable’s Mohaymen (Tapit) in Saturday’s GII Xpressbet.com Fountain of Youth S. looked to have at least a small shot at taking down the East Coast’s top threat for the GI Kentucky Derby. But races are not run on paper, and at the end of 8 1/2 furlongs in the waning afternoon hours, the $2.2 million Keeneland September joint sales-topper confirmed that he remains the boss with a confident 2 1/4-length defeat of ‘TDN Rising Star’ Zulu (Bernardini). Fellowship (Awesome of Course) made belated progress into third, while the previously unbeaten Awesome Banner (Awesome of Course) and Awesome Speed (Awesome Again) were major disappointments.

“I had to ask him a little more today because I let him run a little more from the half-mile pole,” winning rider Junior Alvarado explained. “I didn’t want him to do that much. [Zulu and jockey John Velazquez] tried to engage me a little bit, but it’s horse racing–I’ve got the best horse today and he makes my job very easy. It doesn’t get much more exciting. I’ve always been very high on him. Each race he improves even more and he proves that he has everything that a rider would want in a horse to point to those big races.”

He’s Just ‘Mo’ Better Than Them…

The second foal from the very talented Justwhistledixie (Dixie Union)–the first was GI Breeders’ Cup Juvenile hero New Year’s Day–Mohaymen first made headlines at the 2014 Keeneland September sale when Shadwell’s Rick Nichols signed the winning ticket on the colt who would become Mohaymen from the consignment of Clearsky Farm.

Brought along slowly by Kiaran McLaughlin, Mohaymen debuted the third Saturday of September and with the best of the New York jockeys in the Keystone State for the GII Pennsylvania Derby, Junior Alvarado was tabbed and the results were spectacular, as Mohaymen showed good speed and turned back a bid from the well-meant Seymourdini (Bernardini) to score by a half-length, with a well-bet and future SW King Kranz (Munnings) third.

Favored to take the next step in Aqueduct’s GII Nashua S., Mohaymen overcame a three-wide run on the turn to defeat Flexibility (Bluegrass Cat) by 1 3/4 lengths and handled that rival again in the GII Remsen S. 24 days later, his first start with Lasix.

Sent off the 3-10 favorite against GISW Greenpointcrusader (Bernardini) in the GII Holy Bull S. Jan. 30, the colt was given a perfect ride by Alvarado to take the race by the throat at midway and finished generously to score by 3 1/2 lengths. On the board at 1-9 for a good deal of the wagering, he invariably drifted as Zulu took some support and was off at 2-5.

Ideally drawn outside in the field of six, Mohaymen broke slightly out, but there was plenty of activity just ahead of him in the opening exchanges, as Awesome Banner drifted in, causing Awesome Speed to take a bump from his outside and causing the Colts Neck runner to bump soundly with 131-1 outsider Golden Ray (American Lion). The latter brushed again with Awesome Speed entering the first turn, causing Mohaymen to take an awkward stride and consign him to a five-deep run heading towards the backstretch. Awesome Banner, experimenting with two turns here off wins in the GIII Hutcheson S. and GIII Swale S. set the pace from the inside with Zulu forced to do the chasing from second. Awesome Speed settled deepest, and this allowed Alvarado to save some ground from about the four path. Sensing Mohaymen breathing down his neck, John Velazquez was forced to go for Zulu with better than three furlongs to race and the previously undefeated colt responded gamely and held a slim lead as they neared the short run in. Zulu came under a left-handed stick with Mohaymen still traveling comfortably to his outside and the gray colt called on his talent and experience to win cozily in the end.

He continued, “I was a little worried about the one with the scooped blinker that was getting out a little bit into the first turn (Golden Ray), but it worked out great. Junior said he asked him a little bit earlier today to engage [Zulu] and he did. He thought he had him all the way. He did ask him a little bit earlier, and he said if he waited he might have kicked on stronger late, but he did it the right way.”

Nichols indicated he would consult with Sheikh Hamdan, but that a confrontation with Nyquist (Uncle Mo) in the GI Florida Derby Apr. 2 is the most likely outcome.

Trained by McLaughlin to complete Gulfstream’s GII Davona Dale S./GII Bonnie Miss S. double, Justwhistledixie would have been the second choice in that year’s GI Kentucky Oaks–won by Rachel Alexandra (Medaglia d’Oro)–but was scratched at the 11th hour. Acquired privately by Clearsky Farm, she was covered by Tapit in her third year at stud in 2012 and was bred back to that leading sire last season.