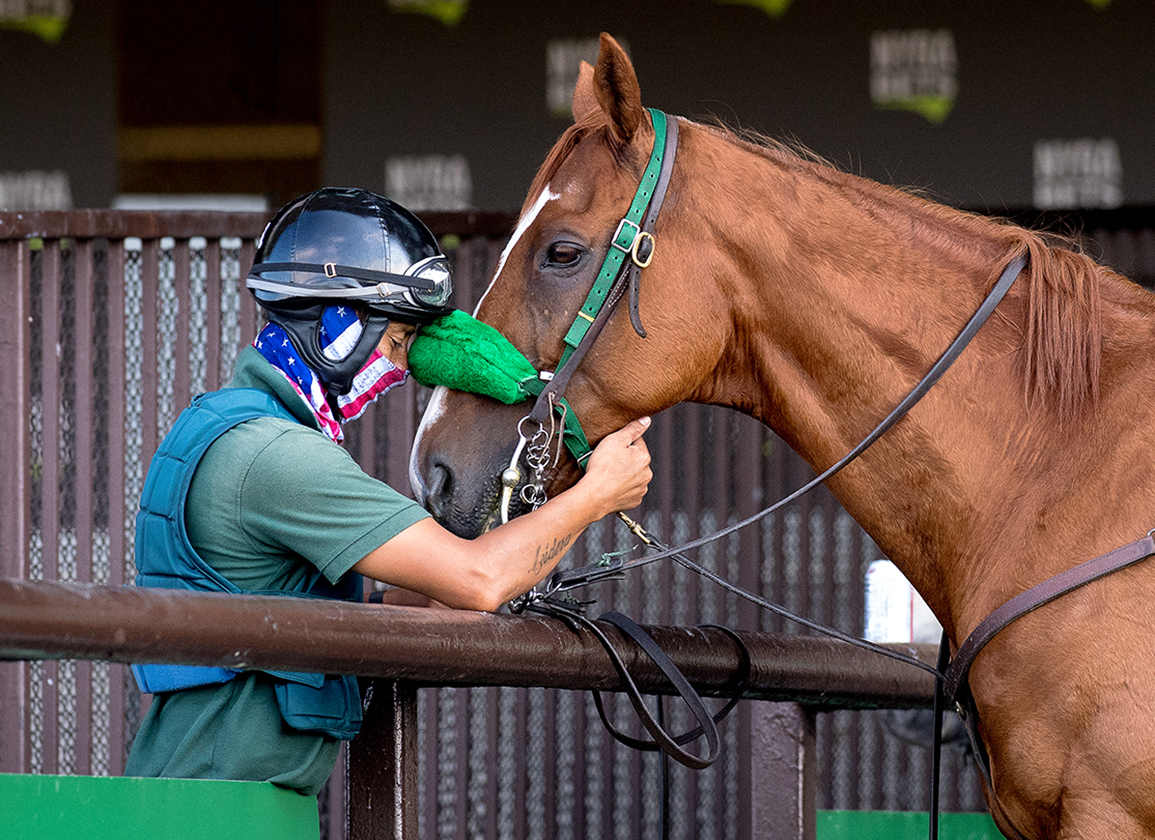 For New York-based trainer Pat Reynolds, it was supposed to be a quiet day, as quiet as it gets at the New York racetracks. September 11, 2001 was a Tuesday, a dark day in New York, and Reynolds was hoping that he could cut his day short after working one of his better horses at the time, Peeping Tom, that morning at Belmont Park. Instead, he was soon heading head first into a nightmare.

Just a few minutes after the first plane had struck the World Trade Center, someone called Reynolds into his office and told him to turn on the news. He sensed immediately that the buildings were under attack, a terrible feeling and one that hit home. Reynolds's wife, Laura, worked in the North Tower, the first one struck by an airplane.

“I went nuts,” Reynolds said. “It's one thing when you read about something like this in the paper, something happening to somebody else. This was a personal disaster.”

The usually punctual Laura Reynolds was running a few minutes late to work that morning and never reached her office. It was not until about 3 p.m. that afternoon that she was able to find a working phone to call her husband and tell him that she was safe. Still later that afternoon, she finished the long walk from lower Manhattan to the couple's home in Flushing, Queens, and fell into her husband's arms.

It is just one of the stories that emerged that day from the New York racetracks and Belmont Park, which is about a dozen miles from what was the World Trade Center. The whole country, and New York in particular, was shaken to its core that awful day, and the New York tracks didn't escape the horror and heartache. Everyone has their story, where they were when the planes hit, who they knew that was killed, how they dealt with the shock and grief.

For New York racing, it was a time to mourn and to hit the pause button, but it was also a time to look ahead. In less than seven weeks, the Breeders' Cup was set to be run at Belmont and no one wanted to give in and cancel or postpone the event. Everywhere, there was a sense that the proper response was to put your head down and get through this.

It didn't exactly start out that way.

With no racing scheduled for that afternoon, jockey Richard Migliore thought he was going to have an easy day. He started off the morning working a few horses at the track and then got in his car to head home. As he was pulling into his driveway, he got a call from a friend telling him what was going on. He went inside his home and began watching the coverage and then decided he wanted to take a look for himself. Along with trainer Dennis Brida, he drove back to Belmont and went up on the roof to get a clear view of what was happening. Migliore and Brida had the entire roof to themselves.

“You could see the smoke and everything else that was going on,” he said. “It appeared to me that one of the towers fell. I said to Dennis that the tower just fell. He said, 'No, I think something just blew up.' As the smoke and dust started to settle, you knew that a tower had fallen. It was surreal. It was madness. I'll never forget being on the roof at Belmont when the first tower fell.”

Among the handful of tracks scheduled to run that Tuesday, all canceled. Belmont was scheduled to resume racing on Wednesday, Sept. 12. Migliore heard rumors that NYRA was going to rush back into action. In what now seems like a tone-deaf move, four U.S. racetracks actually ran on Sept. 12 and 26 were in operation on the Friday after the attacks.

“There was talk there was going to be racing immediately because people thought we had to get back to some sense of normalcy,” said Migliore, whose wife, Carmela, lost a cousin, Charles Lucania, in the attacks. “Then, of course, smarter heads prevailed. It was decided that we had to take a step back.”

In the executive offices, NYRA President Terry Meyocks knew that some important decisions had to be made and made quickly.

“We discussed with the trustees and with our management team what was the right thing to do,” he said. “We knew we needed to take some time off. At the same time, we knew that the Breeders' Cup was coming up and that we had to move forward.”

Belmont resumed racing on Sept. 19, eight days after the attacks. The day began with a moment of silence before Sam Grossman played a rendition of “America” on his bugle. There were 5,436 fans in the massive stands and many seemed to have their minds elsewhere.

“I remember having mixed emotions that day,” said Migliore, who won the day's third race. “The jockey's room has always been my comfort zone. Everything else could be going wrong in my life and I could walk into the jockey's room and just escape. I could have a huge argument with my wife and when I walk into that room, it's the furthest thing from my mind. There was a sense of relief that I was going to get back to what I do. Yet, it still didn't quite feel right. It almost seemed trivial. Big deal. I got to ride in a few horse races. There was something a hell of a lot more important going on, and only a few miles away from where we lived.”

Two nights later, the Mets entertained the Atlanta Braves and the sporting world as a whole began to return to normal. But the Breeders' Cup remained a concern. With horse coming in from all over the country and the world, there were so many moving parts and so many concerns.

Forty-six days had elapsed since the attacks on the World Trade Center, but reminders were everywhere when horsemen, jockeys, track management and fans started to file into the track.

“I remember going into the infield before the races,” said Jerry Bailey, who would win the GI Breeders' Cup Sprint that day aboard Squirtle Squirt. “All the jockeys gathered and they took pictures of us holding American flags. I looked up at top of the grandstand at Belmont and remember seeing snipers up there with their rifles. I thought to myself, is this the way it is going to be from now on? It struck me how different things had become.”

“The Breeders' Cup was crazy because of all the security,” Migliore recalled. “You look up on the roof and there's snipers everywhere. Everywhere you went, there were bomb sniffing dogs. They put up those big cinder block buffers so someone couldn't drive a car into the lobby.”

The day went off without a problem and it finished up with a win by the American-based Tiznow by a nose in the GI Breeders' Cup Classic over European shipper Sakhee. As he so often did, announcer Tom Durkin captured the moment perfectly, calling out “Tiznow wins it for America!”

“We all took a lot of pride in how well the Breeders' Cup worked,” Meyocks said.

As for Reynolds, he's been training ever since that fateful day. The first trainer of Big Brown, he's had some good years, but also some slow years. He's learned to deal with it.

“This is a wonderful sport and something I've spent my whole life doing,” he said. “But when it comes down to human life, everything else is secondary. That day, it put everything else into perspective.”