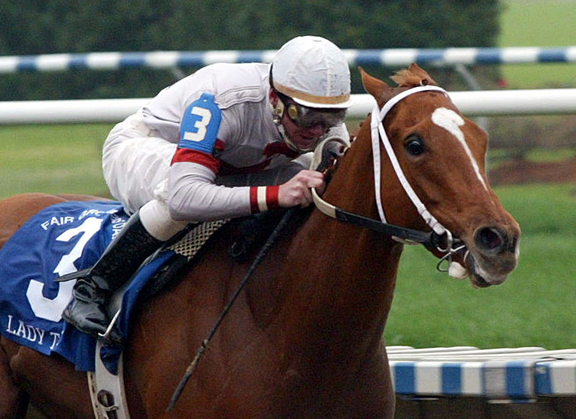 Hailing from the same shedrow of Hall of Fame trainer Steve Asmussen isn't the only thing that recent, ultra-impressive Oaklawn Park winners Casual (f, 3, by Curlin) and Volatile (c, 4, by Violence) have in common.

The promising duo–both bred in Kentucky by Hill 'n' Dale Equine Holdings, Inc. and Stretch Run Ventures, LLC–trace their lineage back to the millionaire and brilliant two-time Saratoga Grade I winner and the Asmussen-trained Lady Tak (Mutakddim).

After acquiring an interest privately in the GI Test S. and GI Ballerina H. heroine from owners Bill and Corinne Heiligbrodt during her 5-year-old season, John Sikura's Hill 'n' Dale Farms bought out the couple as they began to disperse their holdings a few years later.

“It's a John Franks family–we did a lot of business together and I was very close with him,” Sikura said of the beaten 2003 GI Kentucky Oaks favorite, who was bred by the late, four-time Eclipse Award winner as outstanding owner.

“I also have enormous respect for Bill and Corinne Heiligbrodt. They've bought so many fast horses and have a great program. They scaled down, but have scaled back up again now. Lady Tak was uniquely talented. Mutakddim gave me a lot of satisfaction. He was one of our first sires and was also a leading sire in Argentina. He's going be a terrific broodmare sire.”

Casual, a 3-year-old daughter of leading sire Curlin out of Lady Tak, kicked off her career with a smart debut victory for her breeders in Hot Springs Apr. 11 (video).

Stuck behind a wall of horses as they hit the quarter pole, Casual gamely threaded the needle beneath Ricardo Santana, Jr. as they straightened for home and ran to daylight along the rail in the stretch to graduate like a good thing by a half-length, earning a 90 Beyer Speed Figure in the process.

“Hopefully, Casual is a good filly. There's still not a lot of racing right now [due to the coronavirus outbreak], and [last Friday's GIII] Fantasy [S. at Oaklawn] came up too soon. I try to be involved in barns where guys have full confidence in their ability and Steve will decide where she runs next. She'll go to Churchill once horses are accepted there and he'll map out a campaign.”

Sikura continued, “It's always rewarding when you have a homebred that shows promise. But at the same time, I've had enough good things and bad things happen in this business that you hope beyond tomorrow, but you don't plan as if tomorrow is already happening. One step at a time. She ran very well. She was visually very impressive and we'll hope she keeps going in the right direction.”

Produced by Melody Lady (Unbridled's Song), a stakes-winning daughter of Lady Tak, the lightly raced 4-year-old Volatile returned from the bench and put on a show at 2705 Central Ave. just 13 days later, clocking the fastest six-furlong final time of the Oaklawn meeting (video).

Dueling in hand through fractions of :21.65 and :44.82, Santana Jr. let the handsome gray loose in the stretch, and the response was devastating. Volatile had 7 1/2 lengths over his nearest rival at the wire while stopping the timer in 1:08.48. He earned a gaudy 101 Beyer Speed Figure.

“He looks to have enormous potential, but again, it has to be fulfilled,” Sikura said. “Steve is a brilliant horseman and he'll have every chance. I hope that comeback race is indicative of what's to come. Even as impressive as that race was, he should improve off that.”

A green, but eye-catching debut winner at Ellis last July, Volatile followed a runner-up effort at Churchill Downs at second asking in September with a sharp, first-level allowance tally beneath the Twin Spires after some trouble at the break in his final start of his 3-year-old season Nov. 3.

The $850,000 Keeneland September graduate is campaigned in partnership by Phoenix Thoroughbred III, Ltd. and Three Chimneys Farm, LLC. Volatile was the most expensive of 72 yearlings sold from Violence's second crop in 2017 and his priciest offspring ever sold at public auction. The 2012 GI CashCall Futurity hero, already the sire of 19 stakes/six graded winners, commands a $25,000 stud fee at Hill 'n' Dale.

“Volatile's sale price probably reflects and lends some credence to market acceptance and the enormity of potential for Violence,” Sikura said. “He looked like he was the hottest young sire in America, got a little quiet and is re-emerging now. The pipeline is full, he bred a lot of high-volume, quality mares. For Volatile to carry the banner–between Violence, Lady Tak and her daughter, and all the other fillies we own in the family–it would be great for us on multiple levels.”

Melody Lady's first foal Buy Sell Hold, a full-sister to Volatile, became the first stakes winner for Violence, capturing the Kentucky Juvenile S. at Churchill Downs and also hitting the board in the GIII Adena Springs Miss Preakness S. at Pimlico. The 10-year-old is also responsible for the 3-year-old colt Soccer Dad (Bayern), a $260,000 KEESEP purchase for Jay Em Ess Stable and a promising second for Brian Koriner behind subsequent graded placed Strongconstitution (Constitution) in his Del Mar debut last summer; a 2-year-colt by Bayern and a foal filly by Army Mule. Melody Lady will be bred back to Violence for 2021, per Sikura.

In addition to Casual and Melody Lady, the now 20-year-old Lady Tak has also produced the SW & MGSP Japanese millionaire A Shin Spartan (Zensational); as well as winners Dona Lucia (Malibu Moon) and Poets Dreamed (Maclean's Music). Barren for 2018 and 2019, Lady Tak foaled a colt by Maclean's Music two weeks ago and she will be bred back to either Curlin or Kantharos.

“Poets Dreamed had a world of ability–she won impressively in her first start at Oaklawn–but got hurt and never got back to form,” Sikura said. “That's why I bred Lady Tak back to Maclean's Music last year.”

As for what's next for Lady Tak, Sikura continued, “Do you breed her back to Curlin prior to knowing how good Casual is going to be? Strong consideration is also for Kantharos. He's like the college walk-on that becomes a phenom. He's really fast and she's really fast–try to uncomplicate the process.”

Stormy's Song (Unbridled's Song), a granddaughter of Lady Tak and named a 'TDN Rising Star' after opening her career with a blowout debut win at Belmont Park, topped Book 6 of the Keeneland November sale in 2018 after bringing $102,000 from Sikura and Vinnie Viola for the Army Mule partnership. She had a colt from the first crop of the unbeaten GI Carter H. winner earlier this spring. Army Mule stands at Hill 'n' Dale for a $10,000 stud fee.

“I want to have as much of that family as we can,” Sikura said.

“It's always a delicate balance trying to retain fillies, staying involved in the family and also getting a return on the investment.”

“It's the ultimate goal to try and get involved in high-end mares,” Sikura concluded. “Your record sort of gets the slate wiped clean and the next challenge is, despite how you performed on the track, how the offspring will perform. It's the epitome of what a breeder can achieve–to raise, breed and sell a superior horse.”