A Fourth Group 1 For Iffraaj's Ribchester In the Moulin 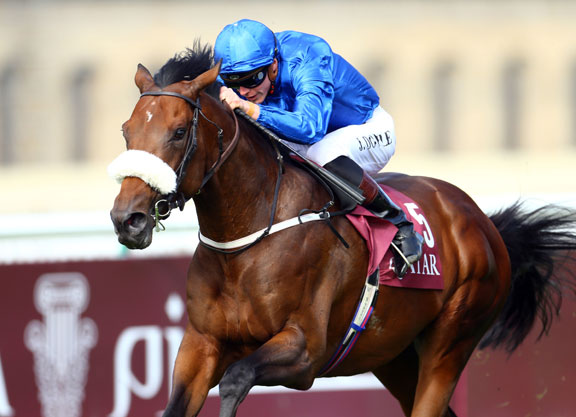 Richard Fahey had intended to give Ribchester a break after his slog through Goodwood's mud when runner-up in the G1 Sussex S., but the horse did the talking at his Musley Bank stables and like Cracksman (GB) (Frankel {GB}) booked his own ticket to Paris with his homework. Last in France when beating the subsequent G1 Prix du Moulin winner Vadamos (Fr) (Monsun {Ger}) in the G1 Prix Jacques le Marois at Deauville last August, the bay had subsequently earned leading miler status in Europe as a result of his comfortable successes in the G1 Lockinge S. at Newbury May 20 and G1 Queen Anne S. at Royal Ascot a month later on contrasting ground. His latest reversal in the Aug. 2 Sussex had a touch of the bizarre about it, but while logic said it should be forgotten there was a doubt about what such an experience would take out of him.

James Doyle had full confidence in the Godolphin representative, however, and kept it simple by settling him in a close-up second behind Robin of Navan (Fr) (American Post {GB}). Committed with a quarter mile to race, he was tackled by Taareef and despite that rival's tenacity it always seemed Ribchester was comfortably holding him at bay as they pulled away from the rest. As in the Vermeille, the winner had to survive another inquiry after leaning on the runner-up in the closing stages but ultimately was allowed to keep group 1 number four. His rider was in no doubt he was much the best in the race and said, “Ribchester played with Taareef at finish, after waiting for his company. He is certainly the best miler in Europe.”

Fahey is now pondering his options. “I have to say, after watching the other races on the card I was worried about the ground as he is much better on faster but he did run his race and it's nice to see him win another group 1,” he said. “He was not certain to come here, as I gave him a little break after Goodwood to freshen him up but he was so well within himself. He was hardly blowing afterwards and has got a lot of ability. You never feel the tank is empty–he is a very tough horse. It will either be the [Oct. 21 G1] Queen Elizabeth II [S. at Ascot] or the Breeders' Cup Mile [at Del Mar Nov. 4], but probably not both as there are only two weeks between them. We'll see. He's not sure to stay in training, but if he does I may be tempted to try him over a mile and a quarter.”

Ribchester is the first foal out of the lowly-rated maiden Mujarah, who showed little of the talent of her three black-type half siblings headed by the G3 Curragh Cup winner Tactic (GB) (Sadler's Wells) and including the listed-placed Zahoo (Ire) (Nayef) who is herself the dam of the G3 Ballycorus S. scorer Convergence (Ire) (Cape Cross {Ire}). The third dam is the G1 Irish 1000 Guineas heroine Mehthaaf, whose best performer was the G2 Premio Lydia Tesio winner Najah (Ire) (Nashwan) and who is herself a daughter of the illustrious producer Elle Seule (Exclusive Native). Winner of the G2 Prix d'Astarte, the daughter of the renowned Fall Aspen also produced the G1 July Cup-winning sire Elnadim and is the second dam of the G1 Prix Maurice de Gheest and G1 Prix de la Foret heroine Occupandiste (Ire) (Kaldoun {Fr}). Mujarah's yearling filly is by Raven's Pass, while she also has a colt foal by Dubawi {Ire}).