A ‘Flattering’ Beginning to Book Four 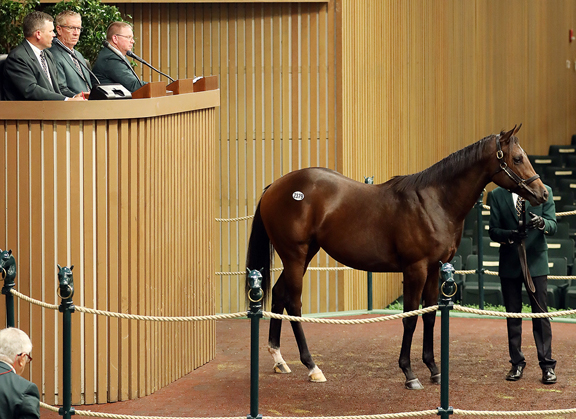 A yearling filly by Flatter led the way during a lively day of trade at Keeneland September’s Book 4 opener Tuesday, bringing $310,000 from bloodstock agent Mike Ryan.

Consigned by Select Sales, agent for Machmer Hall as Hip 2379, the dark bay or brown filly is out of the graded stakes-placed Candy Ride (Arg) mare Co Cola. She was bred in Kentucky by Machmer Hall. This is the extended female family of two-time G1 Dubai Golden Shaheen winner and millionaire Mind Your Biscuits (Posse) and Canadian champion Kimchi (Langfuhr).

A son of Palace Malice was the highest-priced colt of the day, registering a $280,000 bid from Michael Dorsey. Hip 2440, out of the multiple stakes-placed mare Giant Sensation (Giant’s Causeway), was consigned by Eaton Sales, agent. Bred in Kentucky by Overbrook Farm & Kildare Stud, he RNA’d for $75,000 as a KEENOV weanling. His second dam is graded winner Sensation (Dixie Union).

“It’s still playing solid for the horses that people want,” Ryan said at the conclusion of the day’s trade. “It’s all about having what the customer wants. If you have what they like, as perceived quality, you’ll get paid. It’s very discriminating though. We bought a nice Flatter filly today to race–I knew she was going to be right up there in the $300,000 range. She’s a quality filly by a very good sire and she’s a really impressive, imposing individual. She’s for a client of Chad Brown’s. She looked like a Saratoga 2-year-old to me.”

“It’s been an incredible sale,” Ryan said. “I don’t recall in many years seeing a sale like last Wednesday, the final day of Book 1. That afternoon was one of the strongest sales I can remember in many years and its carried through. Book 2 was extremely strong as was Book 3. Some of the pinhookers have done very well and some breeders have done very well based on stud fees, too. A lot of people have had a good week, which is great for the business. The energy and electricity here all week has been pretty palpable. Even today early this morning, there were still a lot of people working the barns looking for horses.”

The September Sale continues through Sunday with all sessions starting at 10 a.m.