A Dozen On the Trot For Golden Sixty 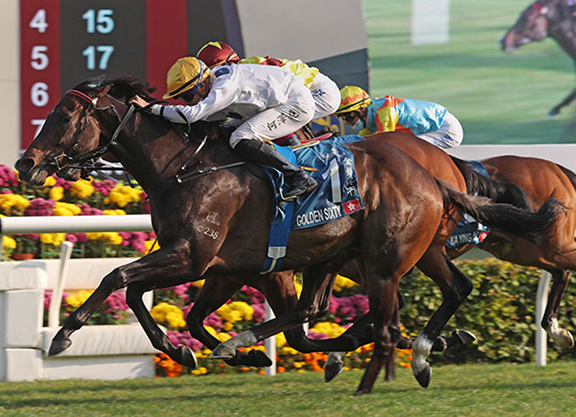 Golden Sixty (Aus) (Medaglia d'Oro) had to channel his inner Usain Bolt in Sunday's G1 Stewards' Cup at Sha Tin, as the 5-year-old sprinted his final half-mile in a mind-boggling :44.18 and final 400 metres in a staggering :21.80 to snatch victory from the jaws of defeat. His record now stands at 16 starts for 15 wins and his 12th consecutive score draws him ever closer to the local record of 17 straight held by the legendary Silent Witness (Aus).

Very little went according to script. With Zac Purton steering, Ka Ying Star (GB) (Cityscape {GB}) took up his customary spot at the head of affairs, with token pressure from Mighty Giant (NZ) (Power {GB}), but there was no pace on, as Golden Sixty settled six lengths away from third-last. Though Purton had rated Ka Ying Star a treat, Southern Legend (Aus) (Not A Single Doubt {Aus}) went on the attack from the box seat at the 400 metres, just as Vincent Ho was rousing the heavy favourite into action deepest out. The 1200-metres was achieved in 1:11.15, but Ho swung out Golden Sixty deepest of all, got after his mount in earnest with a furlong and a half to race and drove past Southern Legend to repeat the finish of the G1 Longines Hong Kong Mile six weeks back. Waikuku (Ire) (Harbour Watch {Ire}) would also have been inconvenienced by the lack of speed and was hampered in the dying strides en route to a fast-finishing fourth.

“They went pretty slow all the way, actually, so he was a little keen and he was pulling a little bit and then everyone sprint[ed] home,” Ho told the HKJC notes team. “I knew I would still get there, but it was quite close.”

Winning trainer Francis Lui suggested that Golden Sixty could return to his Hong Kong Derby-winning distance of 2000 metres for his next start in the G1 Citi Hong Kong Gold Cup Feb. 24 where he could run into Horse of the Year Exultant (Ire) (Teofilo {Ire}).

WATCH: Golden Sixty makes it 12 in a row in a thrilling Stewards' Cup

Bred on the exact same cross as American Grade I winners Elate and New Money Honey and the cross over Forty Niner responsible for dual champion Songbird, Golden Sixty is one of 26 top-level winners worldwide for Medaglia d'Oro, who was represented by an exciting new 'TDN Rising Star' in the form of Prevalence at Gulfstream Park Jan. 23. Golden Sixty has an unraced 3-year-old half-brother named Rainbow Connection (Aus) (Choisir {Aus}) and a yearling half-sister by Capitalist (Aus) that sold to All Winners Thoroughbreds for A$425,000 the Magic Millions Gold Coast Yearling Sale earlier this month. Having missed to Medaglia d'Oro's son Astern (Aus) in 2017 and to Trapeze Artist (Aus) (Snitzel {Aus}) in 2020, Gaudeamus was bred to Vancouver (Aus) on a late October 2020 cover. Read more on Golden Sixty's pedigree and upbringing here.