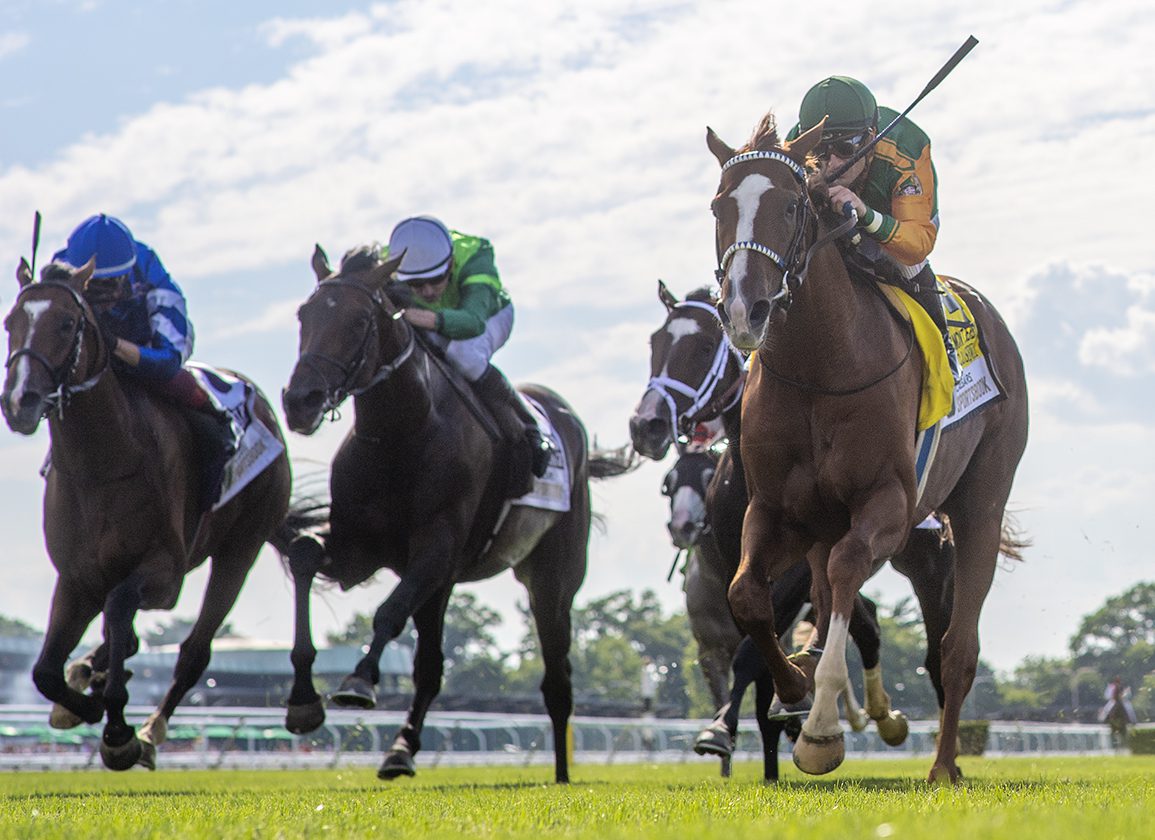 A season that has had more ups and downs than the Cyclone at nearby Coney Island reached new heights for Classic Causeway (Giant's Causeway), as the blaze-faced chestnut–making his first start on the grass–forgot to stop en route to a 3/4-length defeat of Godolphin's favored Nations Pride (Ire) (Teofilo {Ire}) in Saturday's $1-million GI Caesars Belmont Derby Invitational on Long Island. Peter Brant's Stone Age (Ire) (Galileo {Ire}), heretofore never worse than midfield in the early stages of any of his previous eight trips to the races, made steady progress to finish third after racing far back through the opening furlongs.

Classic Causeway was having his second start Saturday for trainer Ken McPeek, who saddled him to a third in the GIII Ohio Derby June 25, and who not afraid to think a bit outside the box.

“He came back good and was eating the bottom out of the feedbag,” said co-owner Patrick McKeefe of Kentucky West Racing. “What Kenny says, I do.”

The early scratching of wire-to-wire GII Pennine Ridge S. winner Emmanuel (More Than Ready) left the pace scenario of the Belmont Derby somewhat murky, and that played right into the hands of Classic Causeway. Employing the same front-running tactics that won him the GIII Sam F. Davis S. and GII Lambholm South Tampa Bay Derby along the Triple Crown trail over the winter, the homebred colt jumped right into the bridle for Julien Leparoux, and while he had a bit of early company in the form of G2 Dante S. runner-up Royal Patronage (Fr) (Wootton Bassett {GB}), Classic Causeway was going along easily enough and was past the six-furlong peg in a manageable :48.02.

Allowed to lob them along and in a good rhythm through three-quarters of a mile in 1:12.33, he remained well within his comfort zone and maintained a safe advantage over Royal Patronage as they reached the quarter pole. Asked for a sprint by the Frenchman, Classic Causeway carried a two-length bulge into the ultimate eighth of a mile, and try as they might, the chasers ran out of real estate. Nations Pride, who defeated future G1 Cazoo Derby runner-up and £1.2-million Goffs London Sale topper Hoo Ya Mal (GB) (Territories {Ire}) by seven lengths in the Listed Newmarket S. Apr. 29, closed his final quarter-mile in a race-strongest :22.98 to just beat G3 Leopardstown Derby Trial romper Stone Age out of second.

“The plan was to go on the lead,” confirmed Leparoux. “The only time I was a little worried was in the first turn when Joel [Rosario, aboard Royal Patronage] was kind of head-to-head with me. When he took back, my horse got to cruising and happy to be on the lead. I was getting him to relax nicely and switch off. It was a good run for him.

“He was actually feeling pretty fresh today,” he added. “It was Kenny's idea to wheel him right back on the grass, and it paid off today for sure.”

Early Saturday afternoon, the New York State Gaming Commission issued a brief statement on the scratching of Emmanuel, saying without elaborating further: “The Commission Steward ordered the scratch of Emmanuel, scheduled to run in today's Belmont Derby, due to issues relating to veterinary records. The matter remains under review.”

Looking every bit a Classic contender off his two wins at Tampa, Classic Causeway was last of 11 as a 37-10 chance in the GI Curlin Florida Derby Apr. 2, casting a fair bit of doubt on his immediate future. After first expressing their intention to pass the GI Kentucky Derby, connections called an audible, and Classic Causeway did not disgrace, finishing 11th, albeit from off the pace. Sensibly spotted in the Ohio Derby after being transferred from Brian Lynch to McPeek, Classic Causeway was a clear third, beaten just over two lengths by Tawny Port (Pioneerof the Nile).

Classic Causeway is one of three foals–all colts–from the final crop of the 'Iron Horse' Giant's Causeway and is the late sire's 36th Grade I/Group 1 winner. His other two offspring born in 2019 are Giant Game, third in last year's GI Breeders' Cup Juvenile, and Shadwell homebred Monaadah, a winner of three of his five career starts and fourth in the Listed Sir Henry S. for Saeed bin Suroor at Newmarket July 7.

Private World is the dam of a 2-year-old filly by Lookin At Lucky, a yearling colt by Justify and a filly by the Triple Crown winner foaled May 15.