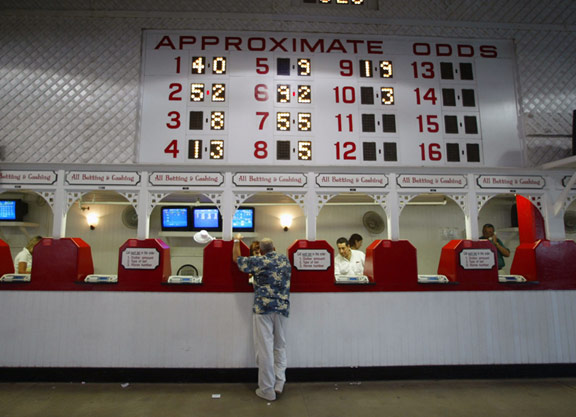 It's possible that the biggest story in horse racing in 2017 won't have occurred at the track or on a breeding farm. Instead, it may have happened Monday afternoon at the Treasury Department in Washington, DC. That's when Treasury and IRS officials finally signed off a long-desired goal of the National Thoroughbred Racing Association and the industry at large: to change how the IRS treats winning bets that hit at odds of 300-1 or higher.

“It's news we've been waiting 10 years for,” NTRA President and CEO Alex Waldrop said at a press conference in Downtown Lexington Tuesday (click here for video).

The new rules state that the IRS will no longer consider just the base wager on winning bets of 300-1 or more. Instead, it will take into account the total cost of the bet. So if a horseplayer puts together a $1 Pick 6 ticket that costs $500 (and thus has 500 different combinations), and wins $10,000, the IRS would previously have looked at that as a winning 10,000-to-1 wager. The change in rules means that the IRS will now consider that winning bet a 20-1 wager ($10,000 divided by the $500 bet), and won't automatically collect 25% of the horseplayer's winning.

“We expect the results to be powerful,” Waldrop said of that money that stays in that horseplayer's pocket. “Independent estimates have said that the new regulations could led to as much as a 10% increase in wagering on U.S. races annually. That's upwards of a billion dollars.”

If that proves accurate, it would be a massive boost to a wagering sector that could at best be described as stagnant. Last year, U.S. handle sat at $10.7 billion–the same figure it was in 2011…without taking into account inflation.

Not even American Pharoah's 2015 Triple Crown run managed to move the needle much–handle was up just 1.2% that year. To put it in greater perspective, not since 1996 has U.S. handle achieved double-digit growth (+11.5%).

“It's hard to estimate, but [10% growth] would be astounding,” said Waldrop. “Overall, we think about 90% of the current withholding and reporting will go away.”

According to the NTRA, the rules were posted as a Public Inspection Document and are scheduled to be officially published in Wednesday's edition of the Federal Register. They will go into full effect no later than Nov. 14, giving racing associations, totalisator companies, and advance deposit wagering (ADW) operators up to 45 days to implement the changes. Some, however, may elect to start as soon as Thursday.

Twinspires.com, one of the nation's leading ADW's, said it would implement changes immediately.

“This is a very big win for horseplayers and for pari-mutuel wagering on horse racing,” TwinSpires President Ted Gay said. “The reduction of wagering dollars withheld from circulation means more money for our players, which means more handle for the industry, our partner tracks, and horsemen. These changes will improve the economics of the sport at every level.”

How We Got Here…

Some background. In the late 1970s, the IRS made changes to its regulations aimed not at horse racing, but at state lotteries and Keno halls. The regulations stated that bets that won at odds of at least 300 times the amount of the wager, and paid $600 or more, would be subject to automatic IRS reporting. (That is, a W2-G would be filed by the entity that took the bet.) If a bet won at at 300-1 or greater, and paid more than $5,000 or more, the IRS would automatically withhold 25% of the winnings.

In those days, when betting options at the track largely consisted of win, place, show and the daily double, those regulations didn't have much of an impact. But as exotic wagers–trifectas, superfectas, Pick 3's, 4's and 6's–grew in prominence, more and more horseplayers were finding an increasing share of their bankroll tied up by IRS withholding.

“The existing withholding and reporting regulations were developed at generation ago,” said Waldrop, who noted that the 1978 GI Kentucky Derby had four wagering pools, while the 2015 Derby had 23 separate wagering pools–seven of which triggered automatic reporting and/or withholding.

Almost since its inception in 1998, the NTRA has pushed for a change to these regulations. But three years ago, it developed a new strategy aimed not at statutory change, but at regulatory interpretation. In short, the NTRA's lobbying arm asked Treasure to reexamine the 300-1 rule. The push gained steam last December, when Treasury opened a 90-day comment period on the proposed changes. Then, in April, 12 members of Congress signed a letter urging proposed regulations to be finalized as soon as possible. While a slew of unfilled political appointees at Treasury slowed the process, all that was needed was the signature of Treasury Secretary Steve Mnuchin. Even as recently as a few weeks ago, NTRA officials had no idea if and when the changes would be adopted.

“It was a bit of a surprise, but great news,” said Waldrop. “This was a team effort. Our strategy included many discussions and round tables with horseplayers to try and understand their issues. We had meetings on Capitol Hill with congressmen and high-ranking officials from Treasury. And we had countless meetings with our lobbyists in DC, and participation from Horse PAC, a bipartisan political action committee that was and is so astutely led by our chairman Bill Farish.”

Said Farish, “We thank the hundreds of individual stakeholders who contribute to Horse PAC; they played a major role in today's victory.”

Eric Hamelback, the National HBPA's chief executive officer, was among those heralding the announcement. “It's once again proof of success for our entire industry, through working together for a cause which we all agree benefits everyone,” said Hamelback.

What the Industry is Saying…

“It's one of the greatest things that's happened in a long time. If I have to put up a $1,000 to win the Pick Six in order to take multiple horses in different races, instead of giving me credit for betting $1,000, right now they give me credit for betting $2 on the winning [combination] I actually had. I'm not getting any of my investment back. This will put more money back in the horseplayer's pocket, which he can in turn put back and play another race. It puts more money into the racetracks. And it gives the little guy a chance to stay in the game longer. It's a very good thing that the horse people have put together.”

“This is great news and couldn't have come about without thousands of horseplayers letting the U.S. Treasury know that change was long overdue.”

STEVE MAY, DIRECTOR OF PARI-MUTUEL WAGERING FOR THE KENTUCKY HORSE RACING COMMISSION:

“Let us say a player invests $48 into 24 combinations of single $2 Pick-4 ticket and has one winning selection that pays $4,235. Currently the player would have to fill out a tax form because the winnings were in excess of 300-1 odds on the base $2 wager. This is an undue burden on the horseplayer and the racetrack, and it creates a large amount of unnecessary tax forms. Under the new rules, the same ticket would have to return $14,449 to require IRS paperwork.”