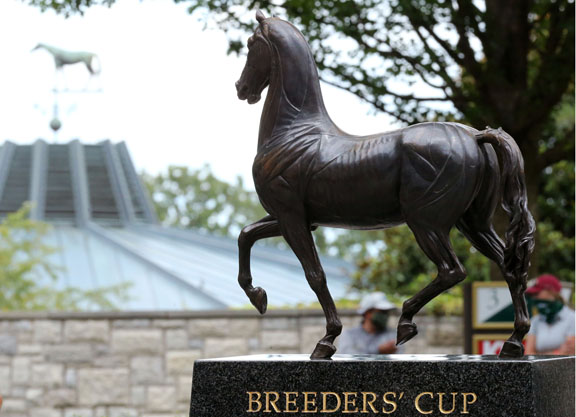 The 2021 Breeders' Cup Challenge Series schedule will consist of 84 automatic qualifying stakes races into the Breeders' Cup World Championships, it was announced Tuesday. This year's series, which includes a record nine “Win and You're In” races for the $6-million GI Longines Breeders' Cup Classic division, will take place in 10 countries.

The complete 2021 schedule can be viewed here.

Horses from around the globe will be qualifying through the Challenge Series for the 38th Breeders' Cup World Championships, which is scheduled to be held at Del Mar racetrack in Del Mar, California, Nov. 5-6, and will be televised live on NBC and NBCSN.

The Challenge Series, now in its 15th year, will be hosted at many of the world's premier racetracks in Argentina, Canada, Chile, England, France, Ireland, Japan, Peru, South Africa and the United States.

As part of the benefits to horsemen, Breeders' Cup will pay the entry fees and guarantee a starting position in a corresponding Championships race for all Challenge Series race winners. The Challenge winner must be nominated to the Breeders' Cup program by the Championships' pre-entry deadline of Oct. 25 to receive the rewards.

In support of the Horseracing Integrity and Safety Act (HISA), which was signed into law in the U.S. last December, all Breeders' Cup Challenge races this year will not permit medications to be administered within 24 hours of race day.

“We look forward to the return of the Breeders' Cup Challenge Series with horsemen from around the world participating in and taking advantage of the many incentives, such as automatic starting positions and paid entry fees, to qualify for the World Championships,” said Breeders' Cup President and CEO Drew Fleming. “We also thank our international and domestic racetrack partners for their important work and dedication to support the Challenge Series.”