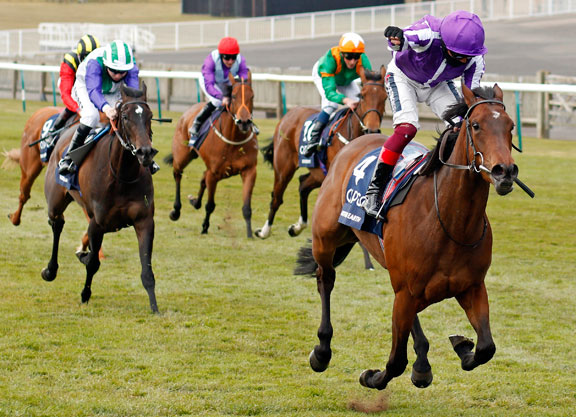 In a renewal of Newmarket's G1 Qipco 1000 Guineas which polarised the dreamers and the cynics, experience ultimately told on Sunday with Frankie Dettori the chief benefactor as he steered Mother Earth (Ire) (Zoffany {Ire}) to glory. Whereas Ballydoyle's Santa Barbara (Ire) (Camelot {GB}) had created all the electricity in the build-up to a Classic which lost some key cast members along the way, it was the stable's hard-working journeywoman who nestled under the radar and emerged clear-best to uphold the prime formlines of 2020. Successful in the G3 Coolmore Stud Irish EBF Fillies' Sprint S. and third in the course-and-distance G1 Fillies' Mile before ending up second in the GI Breeders' Cup Juvenile Fillies Turf, Derrick Smith's colour-bearer was an over-generous 10-1 shot boasting the second-highest official rating in this field. Switched off towards the rear early racing on the far side, the bay arrived full of running out wide to take the lead 1 1/2 furlongs from the finish as Santa Barbara had an understandable moment of greenness. As the field drove to the line spread across the track, Mother Earth was already gone beyond recall to give O'Brien a seventh renewal and fifth since 2016. A length second was Saffron Beach (Ire) (New Bay {GB}), who denied Fev Rover (Ire) (Gutaifan {Ire}) by a neck with the 5-2 joint-favourite Santa Barbara nosed out in fourth.

A fourth 1000 Guineas for Dettori means that between the winning riders of the two weekend Classics there is a grand total of 104 years. Like Saturday's hero Kevin Manning, Frankie has a wealth of experience which is invaluable in these clashes and he was in typically ebullient form as he celebrated his 20th Classic victory. “Come on the oldies. We can still do it!” he said. “Aidan gave me a lot of confidence. I rode her cold, followed Ryan and kicked at the top of the hill. I knew she'd get home and I was able to enjoy it. I think she'll get a mile and a quarter. She's very easy to handle and she's very brave. She's not very big, but she's got a big engine.”

Introduced as soon as the Irish flat season resumed after the lockdown last June, Mother Earth was second to the precocious Frenetic (Ire) (Kodiac {GB}) over an extended five furlongs at Navan before finishing a distant third in the G3 Albany S. nine days later at Royal Ascot. Backed up quickly when a four-length winner of the Coolmore Stud Irish EBF Fillies' Sprint over the same six-furlong trip at Naas, she looked in need of further when third behind Aloha Star (Ire) (Starspangledbanner {Aus}) and old rival Frenetic in The Curragh's G2 Airlie Stud S. Her subsequent performance when third behind TDN Rising Star Pretty Gorgeous (Fr) (Lawman {Fr}) in the G2 Debutante S. again at The Curragh in August suggested that even seven furlongs was insufficient, but when Seamie Heffernan attempted to employ her stamina from the front in the G1 Moyglare Stud S. the plan backfired and she faded to 11th.

In a now-notorious error, Mother Earth was third in the Fillies' Mile where her number cloth was mixed up with stablemate Snowfall (Jpn) (Deep Impact {Jpn}) but after all the focus on that mistake had died away her performance when chasing home Pretty Gorgeous and another TDN Rising Star in Indigo Girl (GB) (Dubawi {Ire}) was clearly another step up. Very few fillies can start so early and end up running such a strong race in a Breeders' Cup contest, but she proved one of those rarities as she charged late to narrow the winning margin of Aunt Pearl (Ire) (Lope de Vega {Ire}) in the Juvenile Fillies Turf. It was significant that she was chosen to go with Santa Barbara to Newmarket and with Frankie boasting such a fine strike-rate for the stable ultimately no surprise that she came through for a stable that now focuses intently on this Classic and its fillies in general.

“The fillies live close to each other and everyone was delighted with both of them,” O'Brien said. “The race went lovely and we were delighted with Santa Barbara–we got a great run out of her and she'll head for the [June 4 G1 Epsom] Oaks now with Mother Earth going for the [G1] Irish 1000 Guineas [at The Curragh May 23]. Going into the dip on fast ground, it wouldn't surprise you that Santa Barbara was green but she would have learnt a lot. She's an unbelievably beautiful big, powerful filly with everything in the right place. Mother Earth is a very good filly, always was, and she put her head down and ran to the line. She is very tough and very genuine and obviously Zoffany is a big loss.”

“It was unfair to Santa Barbara to come, but we had to with a view to coming back for the Oaks,” O'Brien continued. “Ryan said he would have liked to have waited longer, but he saw Frankie coming on his outside and he had to go. We never took her off the bridle at home–today was her first time. Hopefully she'll come out of it okay and it will do her good. We were never going to over-race her and wanted to limit the amount of times she ran, with a late-season campaign planned after the Oaks.”

Saffron Beach's trainer Jane Chapple-Hyam said of the runner-up, “It would have been the quickest ground she has been on, but she can handle it because she is versatile as you saw in the Oh So Sharp on good-to-soft and here on the quicker ground. We are just all thrilled and I'm sure the owners are highly delighted. This time last year, she wasn't even in training. She has seen the mile out 100 per cent. I knew she would get the mile and I know she will get a mile and a quarter as well. There is a good one in her.” Richard Fahey had made no secret beforehand of his expectations of Fev Rover and her performance was justification of that. “We were delighted with her–it wasn't a truly-run race really,” her trainer commented. “Paul [Hanagan] felt the ground was a bit quick for her and she just rolled about a bit, but you'd have to be happy with that. She probably will go further in time and a bit of juice in the ground doesn't bother her at all. She's in the Irish Guineas and that was going to be the plan–that or Royal Ascot.”

On a weekend where Jim Bolger has been omnipresent where it mattered, it was the master of Coolcullen who initially campaigned the dam Many Colours (GB) (Green Desert) and drew from her a win in the Listed Dance Design S. and second in the G3 Denny Cordell & Lanwades Stud Fillies S. before she switched to Saeed bin Suroor. It took her a while to produce a black-type performer, but 12 years after her own exploits in that sphere she had the G2 Premio Dormello winner Night Colours (Ire) (Night of Thunder {Ire}) in October 2019. Earlier that month, Mother Earth had been a relatively cheap €150,000 purchase by M V Magnier at the Goffs Orby in what would amount to yet another piece of prescience from Coolmore. Many Colours's latest produce are a yearling filly by Sioux Nation and a colt foal by Zoffany.

Mother Earth becomes the first Classic winner for her sire, who was taken from the industry all too soon given his recent rise to prominence. Many Colours was the leading performer for First of Many (GB) (Darshaan {GB}), in turn a full-sister to the G3 Lillie Langtry S. runner-up Without a Trace (Ire) and a half to the Listed Marygate S. winner Patience Alexander (Ire) (Kodiac {GB}) who was also third in the Albany. She is connected to the G3 Anglesey S. and G3 Molecomb S. winner Lady Alexander (Ire) (Night Shift), dam of the G3 Palace House S.-winning successful sire Dandy Man (Ire) (Mozart {Ire}) and to Anthem Alexander (Ire) (Starspangledbanner {Aus}) who took the G2 Queen Mary S. and was placed in the G1 Cheveley Park S. and G1 Commonwealth Cup.